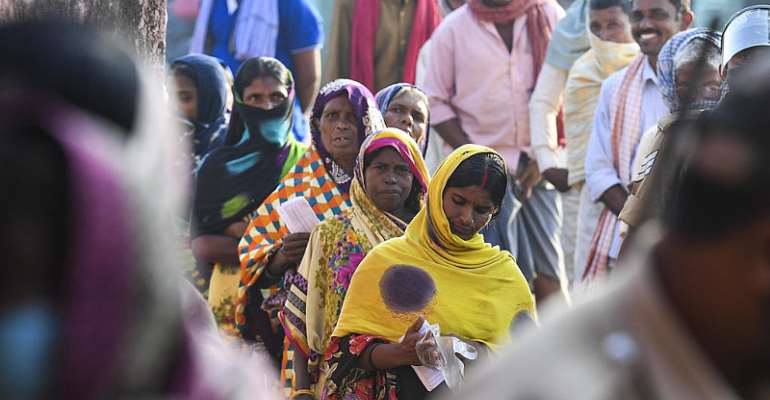 India's third most populous state Bihar has begun voting in local legislative elections involving 72 million voters who are to choose between candidates offering free Covid-19 vaccines and salaried jobs to those who elect them to power.

Twelve million people voted Wednesday in staggered polls in Bihar, where chief minister Nitish Kumar, 69, hopes to retain power for a fourth term since 2005. He is challenged by Tejashwi Yadav, a rival less than half his age.

The BJP, which has lost more state elections than it has won since 2014, faced flak for the vaccine-for-vote deal as Indian Prime Minister Narendra Modi darted across Bihar seeking support.

“The politics of vaccine shows the BJP has nothing more to offer than the fear of disease and death,” said Yadav as India's Covid-count came within nudging distance of eight million on Thursday.

Opposition political leader Rahul Gandhi taunted the BJP, which analysts say could jettison Kumar if it won a majority in the 243-seat Bihar assembly.

Others predict chief minister Kumar would ditch the BJP in case he single-handedly swept the polls.

In a bid to shore up his popularity, Kumar claimed more than 95 percent of Bihar's 210,000 Covid patients recovered under his care.

Kumar faces outrage for neglecting migrant workers who returned to Bihar, some having walked hundreds of kilometres after a nationwide lockdown in March left them jobless elsewhere in India.

Challenger Tejashwi Yadav, who leads a rainbow coalition into the electoral battle, changed tack, offered one million jobs if voted to office in capital Patna.

“I could have also promised 10 million jobs just for the sake of promising but I am not doing that because this will become a reality in the first meeting of my cabinet,” said the 31-year-old, who is drawing record numbers to his rallies in a worrying sign for his rivals.

“Up to 70 million jobless people in Bihar include university graduates, engineers and doctors and such promises are sweet music,” added analyst Anand Ojha.

A third of 502 contestants, who will seek votes in the second leg of the polls on 3 November, faced criminal charges including murder, abduction, rape, robbery and rioting.

“All major parties have given tickets to 47-64 percent candidates who have declared criminal cases against themselves," said Association of Democratic Reforms.

Almost a third of 1,066 contestants who faced balloting on Wednesday had similar police charges, the independent election watchdog reported.