3 Arrested For Robbing Passengers At Wulugu 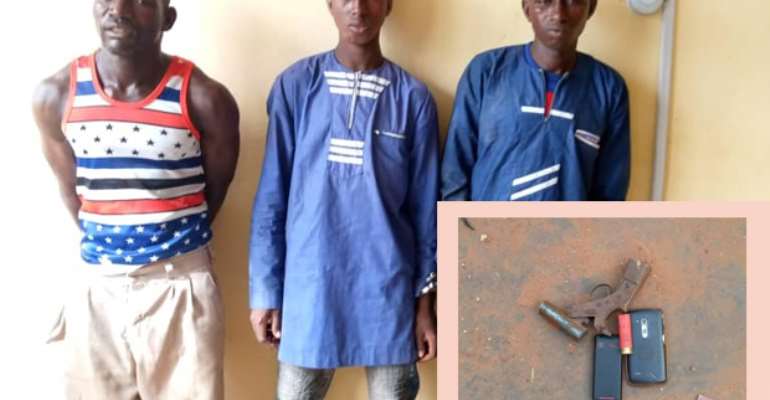 Three suspected armed robbers are in the custody of the Walewale Divisional Police Command for robbing passengers at Wulugu in the West Mamprusi Municipality of the North East Region.

According to the police , on October 26,2020 at about 1:00pm, one Abubakari Abdul-Wakilu, a resident of Bulpeila in Tamale, reported that he was in charge of a Nissan Van with registration No. GS 1295-18 loaded with 14 passengers travelling from Tamale to Bolgatanga.

He added that upon reaching a section of the road between Wulugu and Karimenga, four armed men suddenly emerged from the bush and started firing into the air, which compelled him to stop.

The complainant said the robbers ordered the passengers to lie down on the ground, subjected them to beatings and succeeded in robbing him and the passengers of their mobile phones and various sums of money.

The District Commander Chief Superintendent, Samuel Yeboah, and other personnel acting on intelligence arrested the suspects at Wulugu as they (suspects) were on motorbikes returning from the robbery scene.

Chief Superintendent Yeboah immediately conducted an identification parade at the forecourt of the district headquarters and the passengers identified all the suspects as part of those who robbed them.

The scene was visited and four empty shells of BB cartridges were found and same picked and photographed for evidence purposes.

The suspects were escorted to their houses at Wulugu for searches during which one locally manufactured pistol and one BB cartridge were found in Sumaila Kadri's room and same retrieved for evidence.

The suspects are currently in police custody and expected to be put before court after investigations.

Publish All Relevant Documents On Amidu's Responsibility For...
39 minutes ago

Return missing Ghc52billion to GCB or face our wrath — ASEPA...
1 hour ago