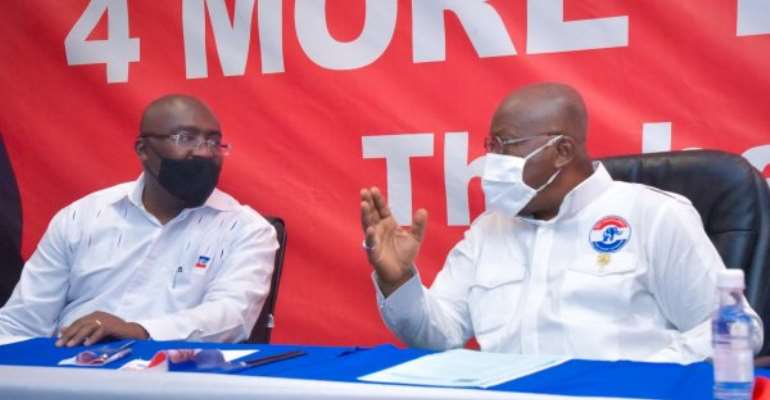 Traders for Nana Akufo-Addo, a group of women traders from Accra and Kumasi, have declared their support for President Akufo-Addo and expressed confidence in his ability to deliver on his Party's manifesto promises in his second term.

They said President Akufo-Addo's excellent record in his first term of office proves that he could deliver again in his second term.

In a brief meeting with the First Lady Mrs. Rebecca Akufo-Addo at her office in Accra, the group, led by Madam Gifty Owusu and Mr Kwame Gyasi, said the Akufo-Addo led government had since assumption of office in 2017, implemented policies and programmes, which have not only promoted a conducive business climate but also brought peace, happiness and contentment to many homes.

The group stated that under the leadership of President Akufo-Addo, Ghana had seen an end to “Dumsor”, resuscitation of the NHIS, Planting for Food and Jobs (PFJ) that had brought food security, and the One District One Factory (1D1F), which was also changing the face of the country's industrial landscape.

They also referred to what they termed as “The almighty Free SHS”, which had brought significant relief to all people nationwide.

Members of the group affirmed that President Akufo-Addo had demonstrated honesty, incorruptibility, hard work and competence, all of which were indications that their future, social and economic status were secured under the able leadership of President Akufo-Addo.

They also congratulated the First Lady for promoting the well-being of Ghanaians especially women and children with initiatives in health, education and women's empowerment.

Mrs. Akufo-Addo thanked the GUTA ladies for their support for President Akufo-Addo and the NPP stating that the President had proven that he could be trusted to keep his promises to Ghanaians, citing the many initiatives and programmes that had been rolled out by him.

She assured the traders that, when given another term, Nana Addo would work harder for Ghanaians, including the business community.

She said it was only President Akufo-Addo who could continue with all his good policies and programmes currently underway in the country, and therefore, the need for them to vote for him to retain power to continue with his good works.

She said programmes like free SHS, free school feeding, One Village One Dam, One Constituency One Ambulance, One District One Factory, Planting for Food and Jobs, and many more were all programmes that needed to be strengthened and that it was only President Akufo-Addo who would ensure the sustainability of those.

"We should, therefore, make sure that we vote for President Akufo-Addo in December to continue to fulfill his many promises.

"All should vote for him...he needs a big win with a big margin to ensure a massive and convincing win".

"I want every Okada driver to be a billionaire" — ‘CODA Dri...
11 minutes ago