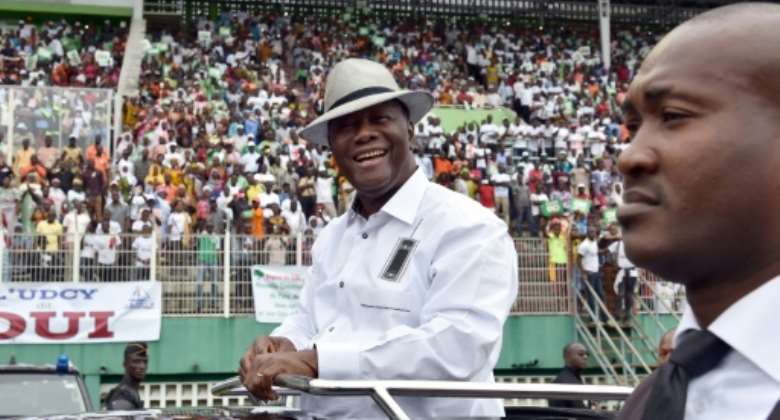 When Ivory Coast President Alassane Ouattara announced in March he would step aside for a younger generation after his second term, the country looked to be moving past decades of often bloody rivalries among its ageing leaders.

Old feuds are rumbling once again in Ivory Coast after Ouattara abruptly decided to face off against adversaries in Saturday's presidential election, stoking up the ethnic tensions and political rancour of the past.

Intercommunal clashes over his third term have killed around 30 since August, reviving fears of a slide into the violence that left 3,000 dead in a 2010-2011 crisis when then-president Laurent Gbagbo refused to accept defeat to Ouattara.

Tensions are running high with Bedie's opposition rejecting Ouattara's bid as illegal, and calling for a boycott of the ballot and a campaign of civil disobedience while refusing to withdraw their own candidates.

Tensions are running high with the opposition rejecting Ouattara's bid as illegal, and calling for a campaign of civil disobedience. By SIA KAMBOU (AFP)

"Even if the election goes well, the situation could degenerate in the long term, that is our concern," International Crisis Group's Rinaldo Depagne said. "The winner will have to work very quickly to calm the situation."

The election in Ivory Coast, French-speaking West Africa's economic hub, will be widely watched in a region where Mali has suffered a coup, Nigeria is struggling with widespread social unrest and an Islamist insurgency has taken root.

Ouattara, a US-educated former IMF technocrat, won praise when he said he would make way for a change in the old guard. But he made an about-face when his chosen successor suddenly died of a heart attack in July.

"You cannot tell me that I am a dictator. I did not want to serve a third term," he told AFP in an interview. "But did I have the right to put my personal concerns above the interests of my party and my country?"

The Ivorian leader says a constitutional reform in 2016 allows him to reset the two-term presidential limit and run again, touting his record on ushering in stability and economic growth to the world's top cocoa producer.

But the opposition has cried foul. They dismiss the electoral commission and the constitutional council that approved Ouattara's candidacy as biased and unable to guarantee a transparent election.

Bedie, a veteran dubbed the "Sphinx of Daoukro" for his often taciturn nature, has called for civil disobedience and an "active boycott" of the vote.

"The third mandate will really mean a fourth, and then on to president for life," opposition candidate Pascal Affi N'Guessan told reporters.

Heightening tensions further, around 40 other candidates have been barred from running, including two of Ouattara's main rivals, Gbagbo and former rebel leader Guillaume Soro.

Both are outside the country after sentences in absentia by local courts, but even from Europe where they live, both men maintain strong influences in their regional Ivorian strongholds.

During Ouattara's decade in power, Ivory Coast has doubled its GDP and enjoyed relative stability since emerging from the ruins of a 2002 civil war that split the country between north and south, and the 2010-2011 election crisis.

The World Bank portrays Ivory Coast as a West African economic success story in a region where ageing leaders tend to cling to power and the jihadist insurgency has challenged neighbouring governments from Bamako to Ouagadougou.

Bedie, seen here in a poster at an opposition rally, has called for civil disobedience against Ouattara's third term. By SIA KAMBOU (AFP/File)

But analysts say Ivory Coast's deep political and regional rivalries have never been resolved with a successful reconciliation.

Much of the violence before Saturday has broken out in towns and villages in the south of the country, where local ethnic groups tied to the opposition clashed with Dioula communities who are seen as close to Ouattara, a Muslim from the country's north.

"The country has become more fractured than it was 10 years ago," said Idayat Hassan, director of the Abuja-based Centre for Democracy and Development. "The election is being run on a regional basis."

Ouattara and his Rally of Houphouetists for Democracy and Peace, the movement named after the country's founder, have fanned out across Ivory Coast for weeks before Saturday's ballot.

Billboards displaying a smiling Ouattara, known as "ADO" to his supporters for his initials, line the highways in Abidjan, with the slogan: "Ouattara, the best, the best for our country."

"The balance of power is largely in favour of Ouattara," ICG's Depagne said. "The opposition does not have the means it wants to prevent the election from taking place."