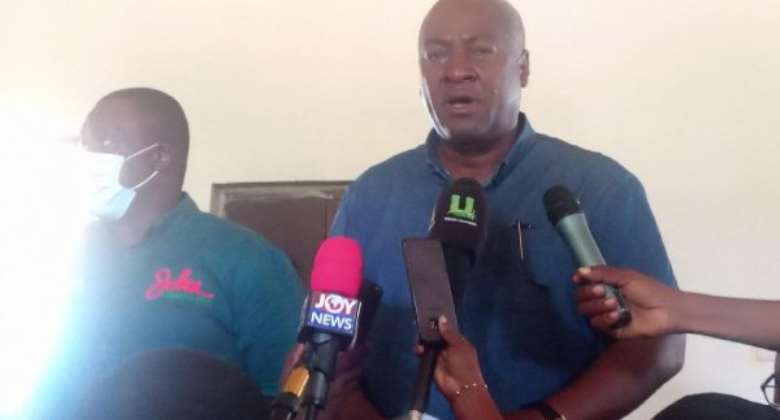 "We are working towards peaceful elections. We believe that Ghana is the only country that we have. We cannot afford to go the way some nations have taken; where there are civil wars and political disturbances. All of us want to stay in peace and safety in Ghana," Mahama said on Wednesday.

He said this when he paid a courtesy call on Nene Tetteh Waka III, Prampram Mantse, at his Palace to seek his blessings for the December 7 General Election.

The visit is part of Mr Mahama's five-day tour of the Greater Accra Region.

Mr Mahama promised to build a district hospital for Ningo-Prampram when re-elected in December.

He said all projects started at the Ningo-Prampram District during his first term, which had since been abandoned, would be revived.

Mr Mahama said his next administration would fix the Ningo-Tsipoli, the Dawanye-Afienya, Ningo-Prampram, and Kpone-Prampram roads.

He said his next government would extend Phase Two of the Sea Defence Project from Ada Foah to Ningo-Prampram and assured fisher folks that he would re-establish the landing beach system to ensure efficiency in the distribution of premixed fuel.

Mr Mahama said his government would ensure that outboard motors were sold to fisher folks at subsidised prices.

The Presidential Candidate also paid a courtesy call on Nene Kano Atiapa III, the Acting President of the Ningo Traditional Area, at his Palace at Ningo.