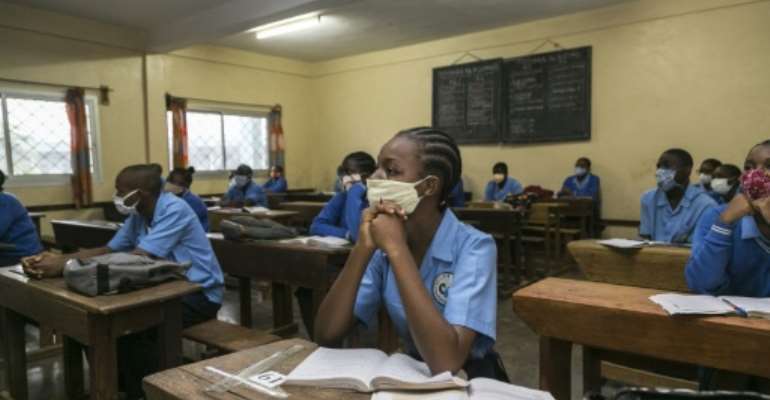 Schools like this one in YaoundÃ©, Cameroon, opened in June 2020 after a hiatus of several months due to the novel coronavirus pandemic. By - (AFP)

Global crisis lenders like the IMF and World Bank have moved at record speed since March to pump out billions of dollars in aid to emerging market nations, especially the six dozen poorest countries, but critics say the money is not sufficient and institutions and rich countries must do more.

The leaders of those institutions might in fact agree: the bank has pushed hard for rich governments and private lenders to suspend debt payments and warned that as many as 150 million people could sink into extreme poverty by next year, undermining years of progress in one stroke.

"There is literally no fiscal space left in the poorest countries in the world," said Stephanie von Friedeburg, interim chief of the International Finance Corporation (IFC), the World Bank's private finance arm.

"There is literally no fiscal space left in the poorest countries in the world," said Stephanie von Friedeburg, interim chief of the International Finance Corporation (IFC). By Brendan Smialowski (AFP)

"I believe that if we can't find a way to accelerate the return of capital, we could lose as much as a decade of development game," she told AFP.

While the IMF and World Bank focus only on aid to governments, the IFC is working to ensure businesses and jobs survive the pandemic in order to spark a recovery.

If it takes another decade to recover those investments, it would undermine the fight against poverty, she warned.

The IFC in March set up an $8 billion fast-track financing program to get money out quickly to help businesses continue running and import and export goods in order to sustain employment.

IFC projects include a $145 million loan to hotel chain Shangri-La Asia to support jobs, mostly held by women, in the tourism sector devastated by the pandemic. By Roslan RAHMAN (AFP)

It recently reached the halfway point, with $4 billion in funds committed.

Von Friedeburg said she expects the second half will move out even faster -- and then the institution could ask the World Bank board for an extension.

Projects include a $28 million loan for a bank in Ivory Coast to provide working capital to small and medium businesses; $145 million to hotel chain Shangri-La Asia to support jobs, mostly held by women, in the tourism sector devastated by the pandemic; and $4 million to Ciel, one of the largest private healthcare providers in Uganda, to continue providing critical healthcare services including treatment of HIV and diabetes.

The emphasis has been on speed.

Last year, it took an average of 276 days to do a IFC project. With the COVID facility, that is now down to just 69 days, von Friedeburg said, noting that initially the institution worked with existing clients who could move more rapidly.

Her biggest concern remains Africa, which faces a recession for the first time in 25 years, and most importantly the 460 million students there who do not have access to the internet.

"All of those children are no longer in school," she said, and history shows most will never go back, especially girls.

The World Bank has pledged to provide $160 billion in total by June 2021, including $104 billion from its main lending unit the IBRD, with the rest coming from IFC and others.

The World Bank has pledged to provide $160 billion in total by June 2021, including $104 billion from its main lending unit the IBR. By KAREN BLEIER (AFP/File)

By comparison, the United States has deployed $3 trillion already to support the economy, and policymakers in Washington are pondering another package of around $2 trillion.

Scott Morris, a former US Treasury official who worked with the development lenders, has been critical of the World Bank, saying it is falling short of its target and taking too long to get the funds to the countries.

"We think the bank should be moving faster," he told AFP. "They do actually have more capacity in absolute terms to lend more."

Morris, with the Washington-based Center for Global Development, said the poorest countries are saddled with high debt payments, so even new World Bank loans leave little to deal with the crisis.

And the bank is not providing clear, recent data on net flows to each country to track that debt load, he said.

The World Bank has pushed back against Morris, and von Friedeburg said the institution "is pushing its balance sheet as far as it can to move as quickly as it can."