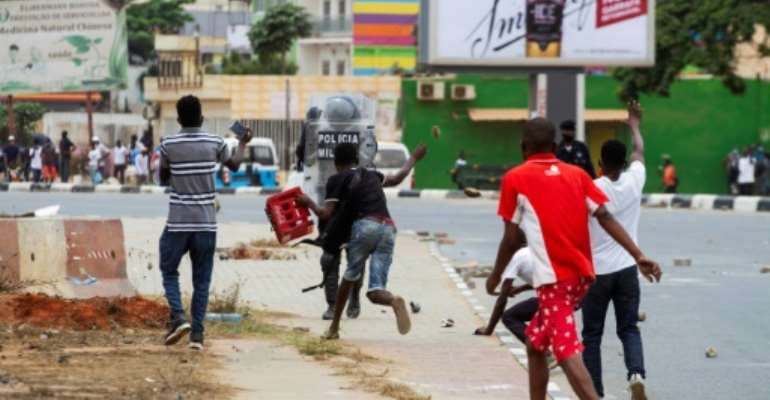 Angolan anti-government protest organisers on Wednesday claimed that almost 400 citizens remain unaccounted for since police cracked down on demonstrations last week, as authorities said only 103 have been detained.

Hundreds took to the streets in the capital Luanda on Saturday to protest against poor living conditions and demand a new date for local elections delayed by the coronavirus pandemic.

Anti-riot police fired tear gas and beat up protesters to disperse the crowd, which had blocked roads with tree trunks and burning tyres.

The government said over 100 people were arrested at the scene, including six journalists covering the event, sparking condemnation from political opposition and rights groups. The media workers were freed without charge.

But protest organisers claim that figure is underestimated.

"At the end of this scenario, almost 500 people, including protesters and others, were missing," said the civil society groups in a joint statement on Wednesday, adding that 387 citizens still remained unaccounted for.

The groups, calling themselves Movimento Revolucionario de Angola, called the protests and received the backing of the main opposition UNITA.

The group condemned the "unnecessary and disproportionate" use of force by the police.

They claimed security forces fired live ammunition at the crowd, alleging two activists were killed and 50 others wounded.

Angolan police did not immediately respond to AFP requests for comment on Wednesday.

The government had previously confirmed the 103 arrests but said there were no fatalities.

The detainees remain behind bars as they await a decision on their fate.

Lengthy court proceedings began on Monday and are expected to drag into next week, as testimonies are being heard individually.

Saturday's protests were the latest show of disenchantment towards the government by Angolans in recent months.

Such events were relatively rare and often targeted by security forces during the reign of ex-president Jose Eduardo dos Santos, who stepped down in 2017.

But demonstrations have become more frequent under President Joao Lourenco.

Several marches against alleged state corruption, joblessness and police brutality took place this year, most of which unfolded peacefully.

Protest organisers have meanwhile announced plans for another round of demonstrations on November 11.