The Tyranny Of Alpha Conde 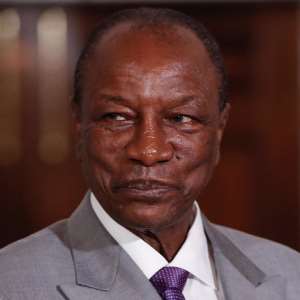 The Guinea election problem is a microcosm of the greater issue sweeping African Governments across the continent. Alpha Conde after serving two terms decided to amend the nation’s constitution so that he can run for a 3rd term this year. This issue of overreaching and playing king is dangerous and undemocratic.

The road to corruption is paved with unchecked powers and unending greed. African Presidents are infamous for unlawfully prolonging their time in office, it is unlawful because they are purposely changing the law to fit their agenda. Term limits in office are important because it allows the general population to have changed if they are dissatisfied with the current system. Under Alpha Conde, Guinean citizens who protest are being jailed and murdered. Conde is ruling the small West African country with an Iron fist, any dissenters are monitored and hunted down.

The Conde administration knows that a house divided cannot stand and so he has made it his mission to put ethnic groups against each other. The Peuhl are the majority in Conakry, the susu and malinke people are the other groups in the country.

The Peuhl people have never had a Peuhl President since the Guinean independence in 1958. This specific ehtnic group is constantly blamed for the problems in the country, late President of Guinea Sekou Toure once said, “We will annihilate them [the Fulbé people] immediately, not by race war, but by radical revolutionary war.” Prominent Fulani leaders like Telli Diallo were assassinated all in the name of sending a message.

The current opposition candidate is Cellou Dalein Diallo, Mr Diallo is not new to the political scene in Conakry. He was in exile for a while in the west because his life was in danger under the Conde Government. Diallo has run for President before but a corrupt election process has failed him and the Guinean people.

As of today, Diallo is declaring himself the winner of the 2020 election but that has not been substantiated by the electoral board. If he is declared the winner and Alpha Conde peacefully steps down it will bring a new age to the political arena in Guinea. The Guinean people are the true victims of this failed state. More than half of the country is reportedly living in poverty in a country of just 13 million. The problem of greed is especially big in Africa as there is no rule of law and justice is just a word in the dictionary, not something to be applied in a society.

The more we sink into debt and become poorer, the more money...
39 minutes ago