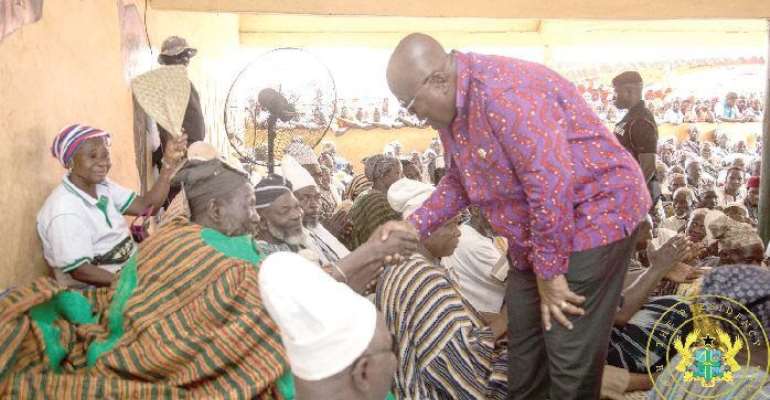 The King of the Mamprugu Traditional Area, Nayiri, Naa Bohagu Mahama Abdulai Sheriga , has indicated that the people of the North East Region will reciprocate the kind gesture shown them by President Akufo-Addo come December 7.

He said one good turn deserves another, hence reciprocating the goodwill.

According to the King, a renewed mandate for President Akufo-Addo to do more will further consolidate the massive gains made in the first four years of his stewardship.

“ Your Excellency, the people of the North East Region are living witnesses to the numerous benefits that have come as a result of the new region.”

He praised President Akufo-Addo for being a regular visitor to his palace since his assumption of office, adding that his palace has been considered by many as the Jubilee House Annex.

The Nayiri made this known at this year's Damba festival of the chiefs and people of Mamprugu Traditional Area under the auspices of the Mamprugu Traditional Council, the Regional Coordinating Council and the Office of the Vice President of the Republic of Ghana on the theme: 'Enhancing our cultural heritage for peace and development'.

The Nayiri said he led his people to ask for a region and it was granted, saying he was the last to submit his petition with very little hope that it will see the light of day but out of the spirit of kindness, President Akufo-Addo did all he could in his power to grant the request.

“I was the first to be presented with the Constitutional Instrument (CI 116) at the forecourt of the Jubilee House on Tuesday 12th February, 2019. Our long held dream that was never considered possible came to pass. I pay glowing tribute to His Excellency the President for the kind gesture.”

The Overlord of Mamprugu lauded the NPP government for the numerous developmental projects in the North East Region.

“One single most significant government investment in the North is the ongoing construction works of the Pwalugu multi-purpose dam. The completion of the dam will significantly help address the perennial problem of flooding during the raining season.”

He stressed that the irrigation component of the dam will help improve the incomes of hardworking farmers and cannot wait for the completion of the dam.

The King of Mamprugu appealed to the president to consider providing the North East Regional Police Command with vehicles to enable them carry out effective patrols in the region.

The Nayiri called on Government, Political Parties, Electoral Commission , Security Agencies and all Ghanaians to be circumspect in the lead up to the December 7 election.

“The youth in particular should not allow themselves to be used as tools to foment violence because your lives are precious.”