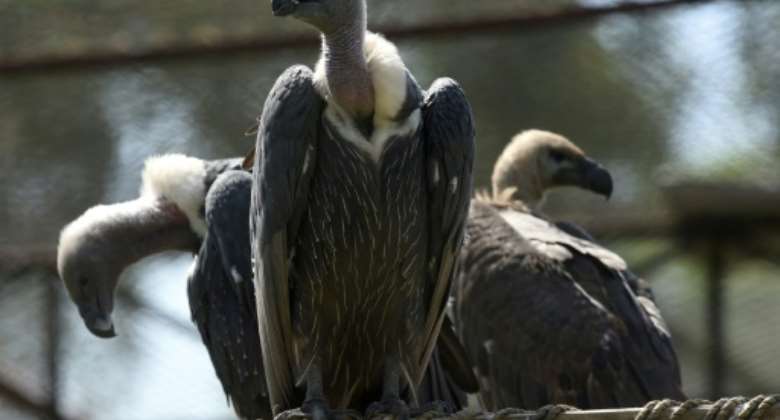 Threats from poisoning and trade for traditional medicines account for 90 percent of reported vulture killings in Africa. By ARIF ALI (AFP/File)

Authorities and conservationists have launched a probe after dozens of critically-endangered vultures were found dead from suspected poisoning in Botswana's famed northeastern Makgadikgadi wetlands, a wildlife expert said Wednesday.

BirdLife Botswana director Motshereganyi Kootsositse said the grim discovery was made on October 22.

Vulture poisoning in not uncommon in the wildlife-rich country.

"We have frequently been receiving numbers of vulture's deaths across the country," he said.

"This situation is getting worse by the day considering that vultures are recorded to be on the decline largely due to poisoning from misuse of agrochemicals."

One of the largest vulture deaths recorded in recent years in Botswana was in June last year, when 537 carcasses were discovered in the northern Chobe game reserve after they ate carcasses of three elephants killed by poachers.

Kootsositse said studies have shown that threats from poisoning and trade for traditional medicines account for 90 percent of reported vulture killings in Africa.

The white-backed vulture is listed on the International Union for Conservation of Nature's (IUCN) "red list" of critically-endangered bird species.