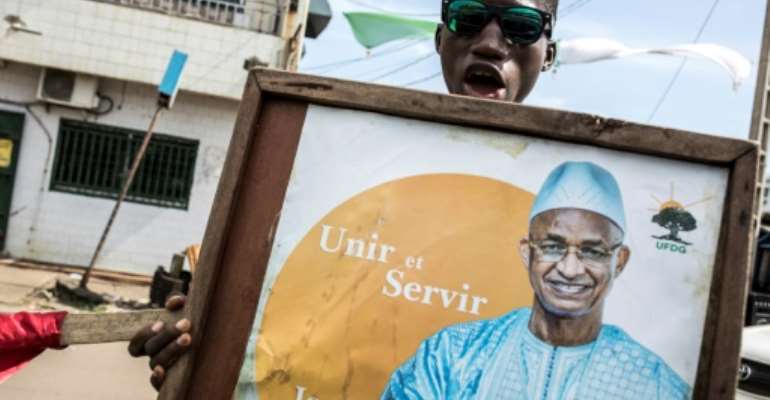 Tension: A supporter holds up a poster for Cellou Dalein Diallo in the run-up to the elections. By JOHN WESSELS (AFP)

Guinean opposition leader Cellou Dalein Diallo said Wednesday that a blockade of his home, imposed by the security forces following tumultuous presidential elections on October 18, had been lifted.

"We discovered on the stroke of noon that we could go in and out. They packed up without warning, in the same way that they had come," Diallo told AFP.

Police barricaded the politician in his home in the capital Conakry after he declared victory a day after the vote -- a claim denied by the government and which led to lethal clashes.

On Tuesday, mediators from the UN, African Union and regional bloc ECOWAS called on the "security measures" around Diallo's home to be lifted "in the spirit of inclusive dialogue."

Diallo said that barricades around the headquarters of his party, the UFDG, and around his offices, remained in place.

The security presence in reputedly pro-opposition districts of Conakry was also notably lighter on Wednesday.

"We were surprised this morning to see that the troops deployed in our area had packed up and gone," said Souleymane Bangoura, an inhabitant of the district of Sonfonia.

Conde was a former opposition leader during years of hardline rule who in 2010 became the first democratically-elected president of one of Africa's poorest and most volatile states.

But he has been accused by critics of authoritarian drift during his second term in office, which he won in 2015.

He pushed through a new constitution in March which he argued would modernise the country.

But it also allowed him to bypass a two-term limit for presidents, arguing that the counter had been reset to zero.

Opposition to that outcome had provoked mass protests from October 2019, in which security forces killed dozens of people.

Conde, who had not been seen in public since election day, visited the military hospital in the capital on Wednesday under the close guard of the "red berets", an elite military unit.

Accompanied by Defence Minister Mohamed Diane and his personal adviser Tibou Camara, Conde spoke with police and gendarmes who had been injured in post-election violence.

On October 19, without waiting for official results, Diallo maintained that data his activists had gathered at individual polling stations showed that he had won.

The self-proclaimed win led to unrest that, according to the government, claimed 21 lives, while the political opposition put the toll at more than 27.

AFP was unable to independently confirm these figures.

According to provisional results released by Guinea's electoral commission, Conde garnered 59.5 percent of the vote, and Diallo 33.5 percent.

Diallo has called on his supporters to maintain pressure until his claimed victory is "recognised" and has also said he intends to file a suit at the Constitutional Court.

The European Union on Tuesday said it "noted" the announcement of Conde's victory, but warned that "questions remain about the credibility of the result," including the final vote count.

France, the former colonial power, on Wednesday expressed "concern" about the situation in Guinea, and said doubts about the vote should be "lifted in a transparent manner."

We will mourn, celebrate and learn from your life – NDC pays...
58 minutes ago