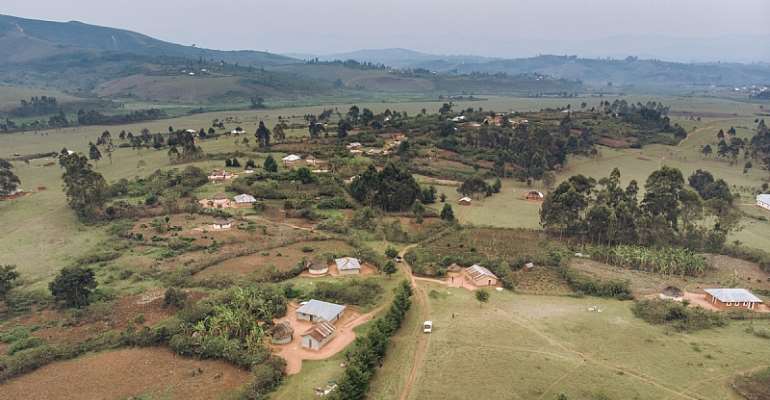 A convoy of Pakistani peacekeepers of the UN peacekeeping mission in the DRC patrol around Minembwe, South Kivu province, October 7, 2020. - Source: Photo by Alexis Huguet/AFP via Getty Images

An intense debate about the rural commune, or district, of Minembwe in South Kivu province in the eastern part of the Democratic Republic of the Congo (DRC) has recently rocked Congolese politics. The stakes are high. The Minembwe area has been subject to horrific violence against civilians committed by militia groups linked to both proponents and opponents of the administrative unit. While the dispute over Minembwe is not the main cause of this violence , it does feed into it.

The current controversy was sparked by the installation ceremony of the commune's mayor on 28 September 2020, which was attended by a high-level political, military and diplomatic delegation. The ceremony drew attention to the fact that other rural communes are not yet functional. These communes were created in the framework of a nation-wide decentralisation process , and place populous rural areas under non-customary local governance.

According to some, the uneven implementation of the communes points to preferential treatment of the Banyamulenge, an ethnic group that dominates the commune's leadership. Opponents of the commune have also flagged procedural irregularities and issues with the commune's geographical limitation.

Yet what has provoked most commotion is that the creation of the commune is seen as an attempt by the Banyamulenge to usurp the authority of other ethnic groups and dispossess them of their ancestral grounds. This would be part of a wider conspiracy by Rwandophones (speakers of Kinyarwanda language) to 'balkanise' the Congo and annex parts of its territory to neighbouring countries or a putative 'Tutsi empire' . Such accusations of balkanisation have a longer history , and have become a staple of Congolese politics.

The idea of balkanisation is informed by discourses of 'autochthony' or indigeneity. These discourses revolve around the claim to be the 'first' or 'original' inhabitants of a certain area as opposed to newcomers or 'foreigners'. Certain ethnic groups in South Kivu draw upon the notion of autochthony to claim local authority and land and deny this to others, who are portrayed as 'foreigners'. These claims are generally grounded in specific readings of history, in particular precolonial and colonial history.

International journalists and observers often take these pervasive discourses at face value . As a result, they reproduce deeply problematic readings of history. These would, for instance, ascribe the current violence in eastern DRC to 'age-old' ethnic animosities .

But a close reading of in-depth historical work on the region tells us something else.

An exclusive focus on conflict and violence obscures histories of cooperation and collaboration. Research tracing individual life-stories in conflict-affected areas in eastern DRC shows that the social relationships between groups considered 'ethnic' are far more complex than the singular focus on conflict allows for.

A good example is blood pacts between people of different communities, such as Banyamulenge and Bafuliiru. These pacts – sometimes going back to the nineteenth century – were an expression of ritual kinship and created bonds of mutual assistance between families from different communities.

Violent conflict may have undone many of these older ties but mutual relations across 'ethnic' boundaries continue to the present. Moreover, in several villages, Banyamulenge and other communities are still living together .

In the past , boundaries between 'ethnic' groups were never as rigid as they are today – neither in social nor in geographical terms. Kinship groups were often mobile and could attach and detach themselves to larger social collectives. Moreover, other forms of belonging, such as clan membership and initiation societies, were often at least as salient as 'ethnicity'.

But complex processes in the colonial era have made ethnicity a rigid and territorial notion . They have largely obscured the memories of these other modes of social existence and belonging.

The dangers of anachronistic thinking

Indeed, colonial and precolonial history are often read through the lens of the present, leading to anachronistic thinking. A case in point is the division between 'autochthonous' and 'non-autochthonous' populations. Near-constant population movements imply that few groups in the Kivus can actually claim to be original inhabitants of certain areas.

Moreover, labelling groups that migrated to the present-day Congo before international boundaries existed as foreigners or immigrants is anachronistic. What causes these groups to be considered outsiders is not the fact that they came from elsewhere. Rather, colonial border-making changed the way their former areas of origins were considered.

Today, the absence of a colonially recognised form of 'customary' organisation is used as 'proof' of whether certain groups were present during the colonial era or not. However, this 'criterion' seems to be mostly applied to Rwandophone groups, and not the multiple other groups that were denied a chiefdom, such as the Batembo .

Moreover, in spite of being granted their own chieftaincy in the colonial era, the Barundi are today not always considered 'autochthonous' either. The Barundi are an ethnic group in Uvira territory who speak Kirundi, which is close to Kinyarwanda. Similar to the Banyamulenge, politicised discourses continue to label them as 'nationals' from a neighbouring country.

At the same time, some groups that migrated from the present-day territories of Rwanda and Burundi are at present considered 'autochthonous'. This is so for the Bazige and Bahungu clans in Uvira territory. As these examples show us, invoking history to sustain claims to autochthony is often problematic.

Bringing history back in

Historical claims of belonging tend to be based on selective readings of history. Yet people in conflict perceive them to be very real. They consider the lands on which they live to be ancestral, and believe they have a right to the soil that is determined by ethnic belonging.

To understand present-day conflicts, we need to take these perceptions into consideration. But we also need to acknowledge that these understandings of history have been shaped by a colonial 'grammar of belonging'. They have also been mobilised politically.

Engaging with the past in a conflict situation, where misinformation abounds, is not an easy task. Colonial documents are circulated out of context on WhatsApp and other social media to prove one position or another.

While drawing on history is a potential minefield, we think there is value in genuinely engaging with the past. History shows us we should not take claims about who belongs where at face value. Moreover, it reveals that those groups in conflict today also have long-standing relations of friendship, integration and collaboration.

These are the stories that are also told by people living in the Minembwe area. But they have become overshadowed by accounts of violence. To overcome conflict, we need to bring back historical nuance and listen to the entire range of lived realities of belonging.

The failure to do so renders us complicit in the colonial project of classifying and dividing people.

By Gillian Mathys, Lecturer, Department of History, Faculty of Arts and Philosophy, Ghent University And

She was an embodiment of limitless courage, commitment to w...
9 minutes ago