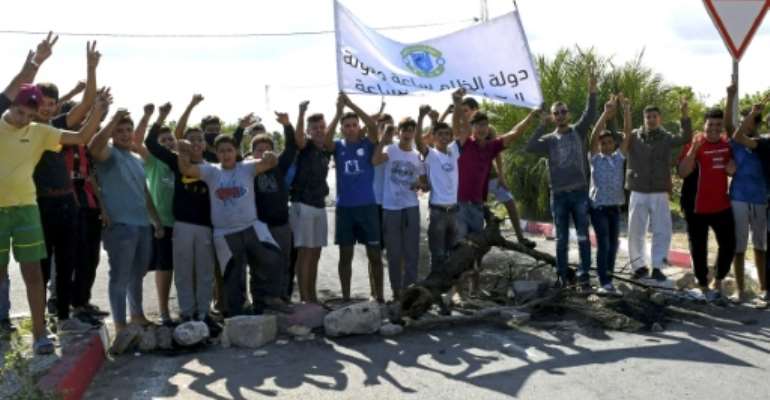 Tunisian youths prepare to burn tires and block the road leading to the city of Chebba on October 19 in protest at the Tunisian Football Federation's decision to ban their local club CS Chebba. By Bechir TAIEB (AFP)

A project by residents of a Tunisian town to make a mass exit by sea to Italy in protest at sanctions on their football club has been put on hold, organisers said Wednesday.

They said the departure of over 2,000 Tunisians from the small Mediterranean town of Chebba, planned for Thursday morning, has been delayed because of "bad weather".

The Tunisian Football Federation on October 17 slapped a one-year ban on CS Chebba, officially over an incomplete and late membership application.

The club's president has for months been at odds with the federation's chief, Wadie Jary, especially after Facebook posts criticising the TFF's financial dealings.

Hundreds of angry fans have taken to the streets of Chebba blocking roads and setting tyres on fire in protest at the suspension.

On Tuesday, the sports and youth ministry vowed to work for a solution acceptable to CS Chebba and taking into account economic and social hardships in Tunisia.

Tents have been erected at Chebba port for people to register for the crossings on an armada of more than 200 boats, with whole families signed up as well as youths from disadvantaged regions in the country's interior such as Kasserine.

Illegal sea crossings to Europe from Tunisia have been on the rise, largely driven by economic woes after a 2011 popular revolution that many hoped would bring change.