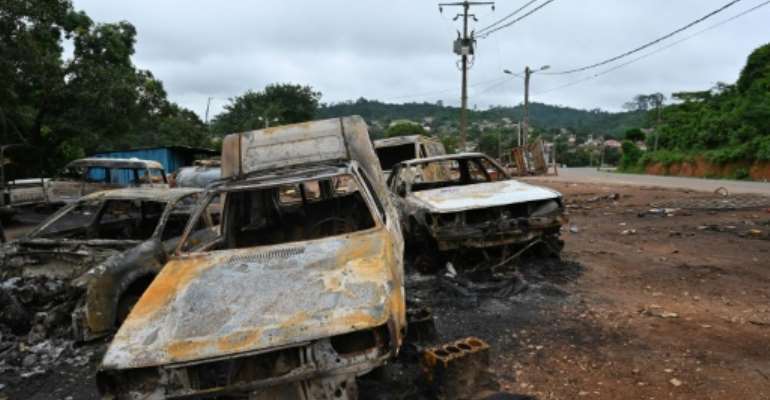 Bongouanou was one town hit by intercommunal violence in the build up to Saturday's election. By Issouf SANOGO (AFP)

Just days before Saturday's Ivory Coast presidential election, young men from the Agni ethnic group took to the streets of the eastern town of Bongouanou armed with machetes and clubs, looking for rivals from the Dioula community.

In their own neighbourhoods, sometimes just hundreds of metres (yards) away, young Dioula men were ready to respond.

President Alassane Ouattara's decision to run for a contested third term has heated up the campaign. But it has also raised the spectre of violent ethnic tensions that have marked Ivory Coast's political feuds for the past two decades.

Those ethnic splits are often inseparable from the country's political and regional divisions: Ouattara, who has been in power for a decade, is a Muslim from the north which is mostly Dioula. His main rivals hail mostly from the south.

Residents threw up make-shift checkpoints after clashes in Bongouanou. By Issouf SANOGO (AFP)

The scene has played out a familiar pattern since August when Ouattara announced he would run again: his opponents rally before clashes erupt between local ethnic communities and the Dioula, who are seen as close to the president.

Deadly clashes have broken out in four towns in the southeast, Daoukro, Divo, Bongouanou and Dabou, leaving around 30 dead.

"Everywhere it is the Dioula against the local ethnic groups. That's not a coincidence, We just don't want a third term. Ivory Coast can't be for just one ethnic group," said Lambert, a Bongouanou Agni leader.

"The Dioula have been in power for 10 years. It's enough."

"They killed two, we killed one," said Cisse Sekou, one of the bosses of the Dioula youth of Bongouanou.

"We are the ones who developed this city. Before it was just a village. They can leave. We are backing Ouattara. We will fight to the death for the third term."

'Revenge of the North'

The clashes have stoked fears of a return to the kind of crisis that killed 3,000 people in 2010-2011, when then president Laurent Gbagbo refused to accept defeat by Ouattara.

Ouattara earlier this year said he would step aside for a younger generation, but reversed his position about a third term when his chosen successor suddenly died.

Tensions have only worsened with scores of opposition candidates barred from running in the ballot, including two of Ouattara's influential foes, Gbagbo and Guillaume Soro.

During the 2010 crisis, Ivory Coast was still emerging from a civil war that erupted in 2002 and effectively split the nation between the rebel-held north and the government to the south.

After independence from France, Ivory Coast was ruled from the south -- northern leaders often say their region has suffered neglect, overlooked for positions in public office and investments.

Now, Ouattara's critics denounce what they see as his "revenge of the north", accusing him of favouring his own region over the south.

In 2012, Ouattara himself talked about an "ethnic catch-up," believing that the north had been excluded.

Ouattara supporters say his third term is not unconstitutional as the opposition says. By Issouf SANOGO (AFP)

Ouattara's government dismisses opposition claims they are stirring ethnic tensions for electoral gain, but even some popular music makes reference to community differences.

One song by Abidjan band Yode and Siro is a hit in local taverns and opposition rallies with its lyrics telling of a nation of 60 ethnic groups where only northerners "eat" while southerners grow angry -- a reference to corruption.

Former minister Marcel Amon Tanoh, whose candidacy was invalidated, said Ivory Coast political parties have an ethnic base of support. Even if they expand their ranks they still keep their core ethnic base.

"I worry the old demons will resurface," he said.

During the 1995 presidential election, President Henri Konan Bedie brandished the xenophobic idea of "Ivorianness" to block Ouattara, accused of being born in neighbouring Burkina Faso, from running against him.

Looking to return to power against Ouattara in Saturday's election, Bedie now head of the opposition, has revived the tactic, making references to Burkinabe migrants.

As electoral tensions have built up in villages and towns, on the ground, gangs of armed youth known as "Microbes" have also appeared, harassing opposition rallies.

Their leaders and motivations are unclear, but the opposition accuses the government of paying thugs to intimidate them, a charge officials deny.

Still, social media networks buzz with heated rhetoric from both groups, some calling for murder.

"Reconciliation has failed," said ICG's Depagne. "There was a cover put over the 2010 crisis, but the underlying problems were never resolved, particularly the political problems."