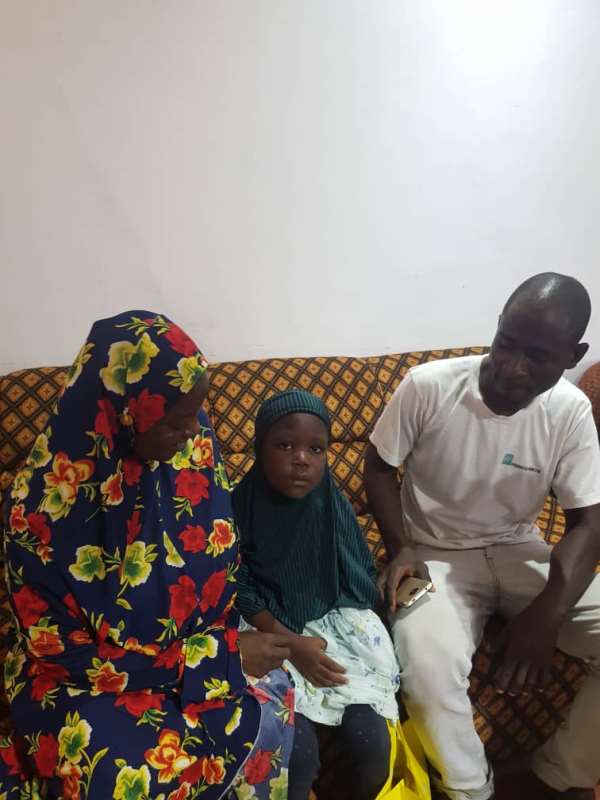 The Voice of Zongo International, a group made up of Zongo indigenes home and abroad has supported little Jamila Hamza Yakubu with an amount of Ghc 8.000.00.

The donation was to enable the six year old Jamila Hamza Yakubu, to undergo a hole - in-heart operation to correct an ailment that has been affecting her growth effectively at the Kirle-Bu Cardiothoracic Center. .

Presenting the money to the family, at Sabon Zongo, a suburb of Accra on Sunday, Hajia Mamata Musah Sheriff, a member of Voice of Zongo International was hopeful the money will be used for the purpose it was donated for.

She noted that they were touched by the plight of the little girl, hence coming to the rescue of the girl and her family.

She was hopeful the support will go a long way to wipe away the tears of the family and help the little girl stand on her feet as other children. Hajia Mamata Musah Sherif asked for prayers to ensure progress, prosperity, unity and stability for their organisation.

In their response, Mr Hamza Yakubu, little Jamila's father on behalf of his family expressed his appreciation to the donors." I have nothing to say than to ask Almighty Allah to reward each and everyone that contributed towards the medical treatment of my daughter" the elated father said.

Mr Hamza Yakubu stressed that the donation came at the right time and it would help a lot in the treatment of his daughter, adding that anyone who fails to appreciate a gesture done unto him by fellow humans cannot do same unto God.

The amount will be used for the sole purpose it was donated for which is the surgery of Jamila. I will also make sure I update the Voice of Zongo leadership, of the progress and any other issue concerning the treatment.

Meanwhile, Mallam Salisu Adamu Bako on his part applauded members of the Voice of Zongo International for their kind-hearted gesture by coming to the rescue of the little child at this critical moment.

He described the gesture as purely the work of Allah and that it is only Allah that can reward the donors. Mallam Salisu Adamu Bako also prayed for a successful surgery for the child as well as members of the Voice of Zongo International.

The Voice of the Zongo International (VOZI) is an organisation made up of Zongo indigenes, home and abroad. VOZI, has among other things, the objectives to provide educational support , sanitation, skills training and empowerment of the Zongo youth as well as the fight against drug abuse in the Zongos.