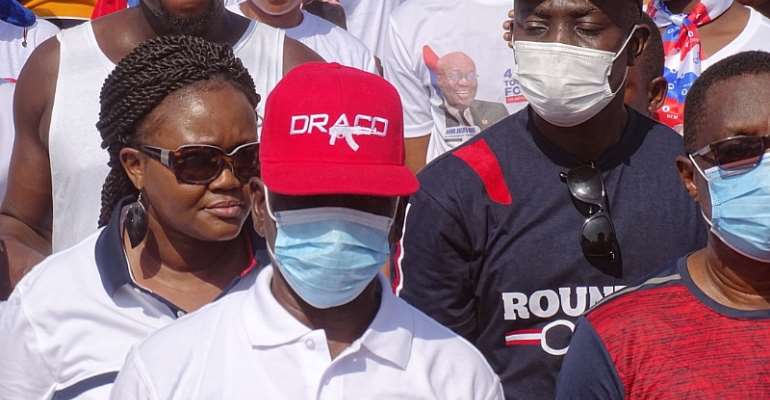 The principal streets of Nkoranza township in the Bono East Region on Saturday, 24th October 2020 were flooded with the supporters and sympathizers of the ruling New Patriotic Party led by the Parliamentary Candidate and party executives who conveyed at the Party office to embark on the much-anticipated health walk.

The health walk which recorded a massive turnout was graced by the regional, constituency, polling station executives as well as party members. It aimed at encouraging members to keep fit and stay healthy as they prepare towards the campaign season for the December polls.

The NPP parliamentary candidate who doubles as MP for Nkoranza South, Hon Charles Konadu Yiadom, held the flag of the party to led the health walk dubbed “Walk4More To Victory 2020” said the objective of the walk was to revive the spirit of the NPP in Nkoranza South and energize the constituents towards the 2020 elections.

Mr. Bernard Antwi Boasiako aka Chairman Wontumi, NPP Ashanti regional chairman, addressing the party members at the Nkoranza main lorry station thanked the participants for the massive turnout and entreated them to rally behind the NPP government in its quest to deliver on its promise to the people.

In their addresses, they called for massive support for Akuffo-Addo NPP led government in the coming election to do more towards the development of the nation. They also encouraged the youth to cultivate the habit of exercising every day and living a healthy life.

The speakers further urged the youth to exercise patience and support the government as it rolls out various social intervention programs that would consequently create lots of job opportunities for them.

Addressing the gathering of party faithful, Mr. Michael Awuah, NPP Japan branch first-vice chairman, mentioned among others some of the taunted programs that seek to lift the millions from misery and abject poverty. They are the Capitation Grant, School Feeding Programme, Planting for Food and Jobs, Free Senior High School, One Village One Dam and Restoration of Teacher Trainee, and Nursing Trainee allowances among many others.