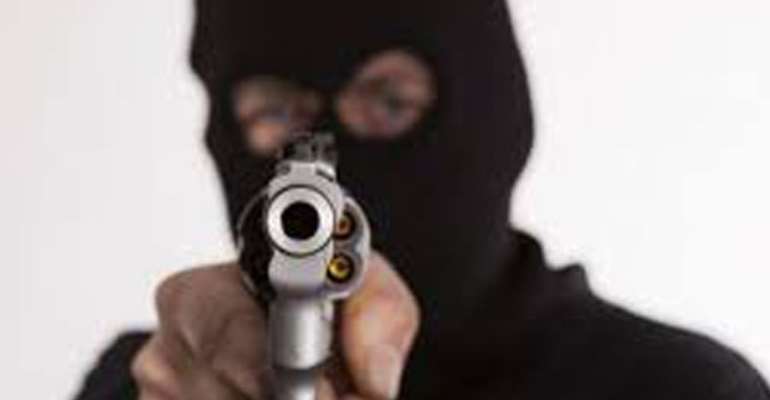 The unmasked gunmen, who were riding a motorbike, snatched the handbag of a young woman containing thousands of Cedis at gunpoint, attacked and robbed another mobile phone vendor of undisclosed sums of money and sped-off.

According to bystanders, the young woman earlier withdrew money from the Sunyani main branch of the Ghana Commercial Bank, and decided to make transactions at the mobile money merchant, near the bank, when the robbery arrived around 1030 hours.

Some officials of the GCB, however declined to comment on the incident, traders around the area told the Ghana News Agency (GNA) on conditions of anonymity the 'spectacle was deadly'.

Financial institutions such as the GCB, Fidelity Bank, Universal Bank and Izwe Financial Services are all situated around the Area.

Traders along the street explained it was not the first time such robbery cases occurred in the area, and appealed to the police to improve police visibility to avert future mishaps.

“I think a police presence here is necessary. We all saw and condemned what happened this morning. But nobody dares to approach the robbers because they were wielding guns”, one of the traders indicated.

Earlier, the GNA gathered the gunmen stormed the GCB and Fidelity bank branches at the VRA Area, but they could not succeed in their operation, after a police on duty suspected and fired warning shots to scare them.