Manifestoes And The Journey To 2020 General Elections: The Right Ingredients For Ghana’s “jollof Rice”? 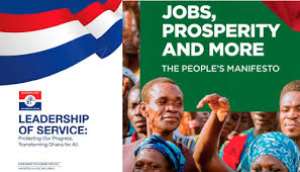 One of the central features of multi-party political discourse is the use of manifestoes. To win an election political parties prepare manifestos and espouse ideologies to woo prospective voters. Manifestos are proposals or documents outlining the policies or programmes that political parties intend to implement when elected to power, while ideologies are more or less coherent sets of ideas that provide the basis for some kind of organized political action. According to the Merriam Webster Dictionary, a manifesto is a published declaration of the intentions, motives, or views of the issuer, be it an individual, group, political party or government. Across the globe, manifesto occupies a higher position in the activities of political parties. According to Dr Mensah-Abrampa, Director-General, of the National Development Planning Commission NDPC electoral manifestos played a crucial role in the visions of party democracy, adding that they provided a compendium of valid party propositions and were used as political campaign material. This is because; it has a great influence on the electorates’ choice during elections.

On the other hand, Jollof rice is one of the most adorable, palatable and irresistible Ghanaian cuisines that are eaten across the country. As such, chefs and cooks make sure they use the right ingredients and cooking methods in its preparation so that they can satisfy the appetite of dinners. Just like jollof rice, Ghanaians have high expectations that the numerous developmental challenges facing the country shall be addressed in the policy proposals or manifestoes of political parties. For that matter, manifestos of the two major political parties, NPP and NDC deserve much attention and scrutiny.

The governing New Patriotic Party (NPP) on Saturday, August 22, 2020, launched its manifesto ahead titled: LEADERSHIP OF SERVICE: PROTECTING OUR PROGRESS, TRANSFORMING GHANA FOR ALL. Indeed, during the launch of the manifesto at the University of Cape Coast, the President of the republic, Nana Addo Dankwa Akufo Addo declared that “will protect our progress and continue down the path of social and economic transformation, on which all Ghanaians are now embarked”. On the other hand, the National Democratic Congress (NDC) on Monday, September 7, launched its 2020 manifesto ahead of the December 7 polls. The event came off at the University of Professional Studies, Accra. Dubbed, the ‘People’s Manifesto: Jobs, Prosperity and more’, the latest document is expected to addresses all “the felt needs of the people”.

It is no secret that the manifestos of these two political parties contain many numerous ambitious policies and programmes. However, the most important question is where these proposed policies and programmes are the right solutions to Ghana’s developmental challenges. As sweet and attractive as the policies may look, they need to be critically assessed of the policies to determine their feasibility and plausibility. This is because one of the tragedies associated with numerous campaign promises is the inability to achieve many of the campaign promises. Since the beginning of this republic, there are a host of developmental projects that have been left uncompleted due to lack of continuity in governance resulting from the change of government. To add to injuries, political parties rather engage in propaganda and lies about having complemented projects/programmes that never exist.

Since the beginning of this Republic, the manifestos of the two major political parties have failed to provide the country with a clear developmental path. This because many policies and programmes are meant to win the next election but not to change or impact the standard of living of the electorates. As such, there is uneven development across the country. While some of the parts of the country have received several developmental projects other parts have largely been neglected. The regional capitals and their immediate surroundings sectors of the country are likely to experience infrastructural developments but districts and municipalities are left to struggle for basic amenities and other infrastructure projects.

Furthermore, the constitutional four-year tenure of office for which a party can/may stay in power is not enough to transform the country. The life of the country matters and therefore, these campaign promises/manifestoes should be examined by citizens. As a matter of urgency, there is the need for the Institute of Economic Affairs (IEA), the National Development Forum and other civil society organizations to scrutinise the campaign promises of these two political parties to see whether they have the ingredients to meet the developmental challenges of the country.

To conclude, Fellow Ghanaians, the life of the country matters. Four years is not enough to change or transform the country. However, much can be done for subsequent governments to build upon. We must therefore use the realities on the grounds to scrutinize these political manifestoes.

A citizen and not a spectator
Ghana’s Life Matters
The existing and generations yet to come must have better lives.