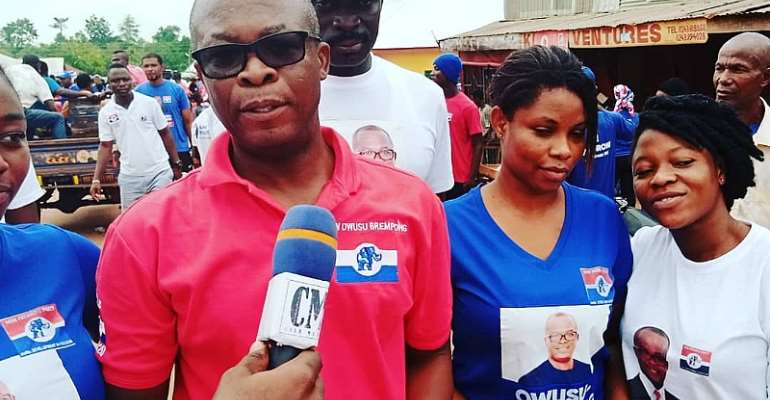 The political ambiance keeps on skyrocketing in Ghana ahead of the 2020 December General Elections, the Coronavirus Pandemic has restricted some of the political activities as compared to the 2016 general elections.

The New Patriotic Party, National Democratic Congress, Ghana Union Movement, Convention People's Party, Liberal Party of Ghana, Progressive People Party, etc are now using the New Media platforms for their Campaign and Health Walk across the length and breadth of the country to sell their messages to electorates.

Hundreds of Party supporters and sympathisers graced the health and Victory Walk in an ecstatic mood.

Addressing the media, the Parliamentary Candidate, Yaw Owusu Brempong stated emphatically that, the incumbent member of parliament, Hon. Collins Dauda is the worst MP in Ghana when every well-meaning Ghanaian makes critical analysis and assessment of his twenty-four years (24) in Parliament.

The people of Asutifi South have really suffered under the leadership of NDC Collins Dauda because most of the communities within the Constituency does not even have access to potable drinking water and place of convenience (Toilet facilities).

Yaw Owusu Brempong emphasised on a holistic pricket that Hon. Collins Dauda cannot show his constituents of a single project he has brought in this last term as Parliamentarian. Asutifi South is fed up with lies, violence, and propaganda.

Yaw Broni reveals that he is not an MP but through his leadership qualities which boggles the imagination, he has been able to lobby an Ultramodern maternity ward, toilet facility, construction of boys dormitory for Dadiesoaba Nursing Training College. Just to mention a few.

He assured the people of his recondite commitment to making Asutifi South the best in terms of development in the region. A vote for former President Mahama and Collins Dauda is disastrous.

NPP Yaw Broni urged every tom, dick, and harry within the Asutifi South province to vote massively for H. E. Nana Addo Dankwa Akufo-Addo, the president of the Republic of Ghana so that he can continue the good work.

The implementation of Cocoa hand Pollination has really made a significant impact on Cocoa farmers in the area, as well as creating employment for the teeming youth.

He echoed that one good term really deserves another, not the twenty-four years of coiling People into tattered penury without any meaningful progress and projects.

Yaw Owusu Brempong is now the Messiah to deliver the people of Asutifi South Constituency from the hands of the most non -performing MP.