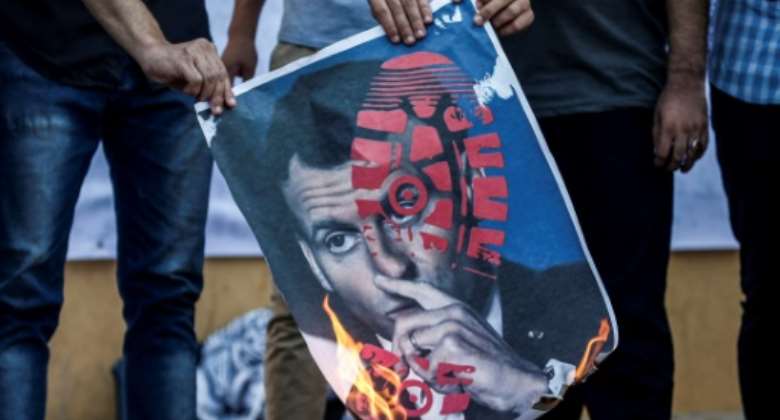 French President Emmanuel Macron's defence of cartoons depicting the Prophet Mohammed have sparked widespread protests, including here in Gaza on Tuesday, but in Tunisia it has triggered a wider debate. By MAHMUD HAMS (AFP)

French President Emmanuel Macron's defence of cartoons depicting the Prophet Mohammed sparked widespread protests, but in Tunisia, it triggered debate balancing hard-won rights of the revolution with respect of religion.

Freedom of speech is seen as one of the most solid achievements of the North African nation's 2011 revolution, the first of the Arab Spring uprisings that ousted longtime president Zine El Abidine Ben Ali.

Macron's recent comments have put that to the test.

"France will not give up cartoons," Macron vowed last week in a homage to teacher Samuel Paty, beheaded for having shown caricatures of the prophet to pupils in class.

His promise has sparked a wave of backlash across the Muslim world from Morocco to Pakistan, with Turkish President Recep Tayyip Erdogan leading the charges against him.

Philosopher Youssef Seddik defending a modern reading of the Koran, said Macron "made a mistake" for political reasons, as he faces pressure from the "far-right" at home.

"His comments palmed off Islam to those who hate," he said, singling out France's far-right National Rally leader, Marine Le Pen.

Earlier this month, Macron described Islam as a religion "in crisis" worldwide, and said the government would present a bill on "Islamist separatism" to strengthen French law that officially separates church and state.

Macron's speech should have included "the 99 percent of Muslims who will never become terrorists," Seddik said.

After Paty's murder, Tunisian President Kais Saied stressed the need to battle extremism by tackling its roots, while Prime Minister Hichem Mechichi said Tunisia defended the right to "freedom of expression and belief."

But it provoked anger among some ordinary Tunisians, with dozens of protesters in the south last week burning French flags.

Boycotts of French goods have spread across several nations in Muslim countries, including in Yemen's rebel-held capital Sanaa. By Mohammed HUWAIS (AFP)

A group of 40 Tunisian academics launched a petition calling for Khiari to be charged.

One of those academics was Ben Slama, who defended Macron's comments, saying he "did not criticise the prophet, but rather spoke as the president of a democratic country -- with a strong tradition of secularism and freedom to blaspheme."

At the same time, she also decried what she called the "unbearable Islamophobic speeches" on some French TV channels, watched by many Tunisians.

"French people must respect others' particularities and stop stigmatising veiled women, for example," she said.

She also deplored the "disproportionate reactions which express a mob psychology based on emotion" on both sides.

While Tunisia is hailed as a rare success story of the Arab Spring uprisings, the authorities have failed to resolve the problems of social exclusion and regional inequalities.

Since its 2011 revolution, the Mediterranean country has been struggling with radical Islam, and has been hit by a string of jihadist attacks that have killed dozens of security personnel, civilians and foreign tourists.

A burnt picture of French President Emmanuel Macron is seen during a demonstration against him at the Palestine Technical University near Hebron, as boycott calls on French goods grow in the Muslim world. By HAZEM BADER (AFP)

Tunisians formed one of the largest contingents of combatants in the ranks of the Islamic State (IS) group in Syria, Iraq and Libya.

A new constitution, a key goal of the revolution, was signed in 2014 -- but it polarised the country over the role of religion.

Islam is not mentioned as a source of legislation, although it is recognised as the nation's religion while guaranteeing freedom of conscience.

"Speaking of the prophet or Islam in such a way is an insult," said Tunis resident Azuz Samudi.

"We oppose religious extremism and terrorism, but the lack of respect for Muslims and their religious convictions is unacceptable!" added Murad Nemri.

Independent MP Yassin Ayari summed up this exasperation on Facebook, writing that "to despise the culture of others is not freedom of expression."