Five charged over the murder of S.African football star 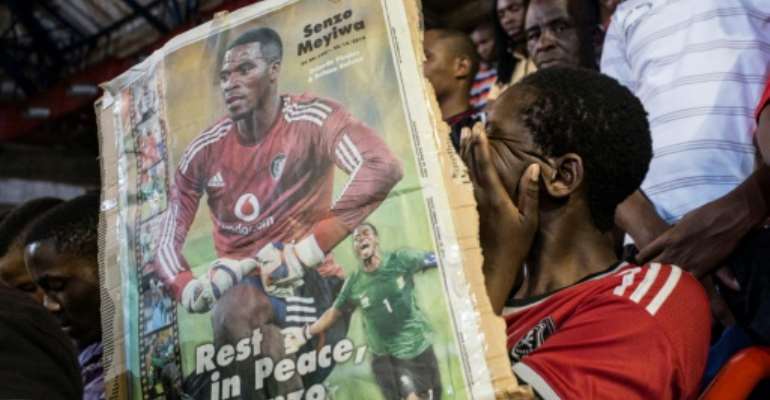 Until now police had failed to find the killers, who reportedly escaped on foot, sparking accusations of incompetence. By Marco LONGARI (AFP/File)

Five men have been charged with the 2014 murder of South African national football captain Senzo Meyiwa, court documents by the director of public prosecutions showed Tuesday.

The 27-year-old goalkeeper and national squad captain was gunned down at the home of his pop-star girlfriend Kelly Khumalo, southeast of Johannesburg on the evening of October 26, 2014.

Police Minister Bhkei Cele said the five suspects had been detained on Monday -- six years to the day that the murder happened.

On Tuesday, they made their first appearance at the Boksburg magistrate court, east of Johannesburg.

According to court documents they were charged with murder, attempted murder -- Khumalo's sister was also shot, but survived -- robbery with aggravating circumstances, and possession of unlawful firearms and ammunition.

Four of the five accused refused to step into the dock, refused legal assistance and insisted on their innocence.

A fifth man, 30-year-old Bongani Sandiso Ntanzi from Rustenburg in the North West province, was represented by his lawyer.

Police had until this week failed to find the alleged killers, who reportedly escaped on foot, and had been accused of incompetence.

"Now we can perhaps get answers to all the questions that we have had," he said.