NDC Has Disappointed You For 28 Years; It's Time To Give NPP A Chance — Bawumia To Afram Plains Constituents 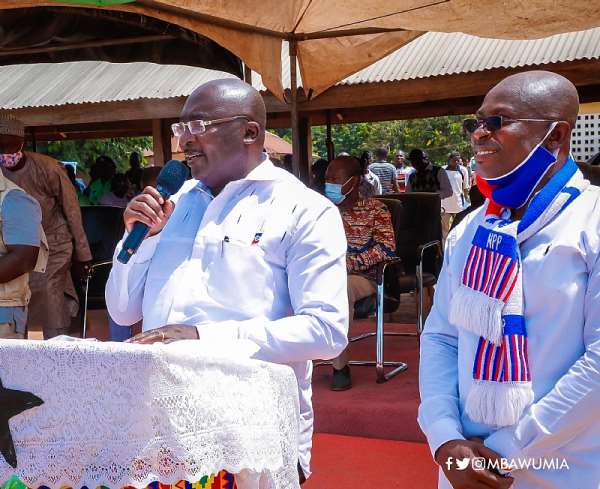 Vice President, Dr Mahamudu Bawumia has made a passionate appeal to constituents of Afram Plains North and South constituencies in the Eastern Region to reconsider their voting pattern after consistently voting for the NDC without corresponding development to show.

The two mainly island constituencies have been voting for the NDC - both Parliamentary and Presidential - since the advent of the Fourth Republic in 1992.

Speaking at the two durbars, Vice President Bawumia wondered why the two constituencies, which have been so loyal to the NDC is lagging behind in terms of development.

"For twenty eight years, you have voted for the NDC and you have been loyal to them but there is nothing to show here for all the support you gave them eventhough they have been in government for years" Dr. Bawumia said.

"In all these 28 years, the MPs have been NDC MPs and they could not get their NDC governments to bring development to the people of Afram Plains, especially under the last NDC government which lasted 8 years in office."

"The NDC has done nothing for Afram Plains and they cannot point to any substantial development they have brought to the people. The evidence is out there and Nana has confirmed it with it."

Dr. Bawumia noted that unlike the NDC, the ruling NPP is a party which believes in all inclusive development, and has therefore, spread development projects to many parts of the country, including Afram Plains where electricity has been expanded to rural communities, as well as the construction of chips compounds and mechanical boreholes.

Dr. Bawumia added that the Akufo-Addo government has already earmarked development projects for Afram Plains, including the provision of tractors to the district assembly to enable farmers, who constitute majority of the constituents, to rent them at affordable rates to improve on their farming.

The Vice President noted that in view of the fact that the NPP has brought about national interventions such as Free SHS, Planting For Food and Jobs, Zongo Development Fund, One Constituency One Ambulance, etc, which everyone is benefiting, as well as showing good faith to Afram Plains, it is about time the constituents said no to the NDC.

"It has been 28 years of neglect and disappointment by the NDC. This year, let the NDC know that enough is enough," Dr Bawumia stressed.

"We urge you to give the NPP a chance and you will see the difference between the NPP and the NDC."

"You need a member of Parliament who can represent you well and lobby for more developments for you. So I urge you to vote for Nana Akufo-Addo and the NPP MP for the much needed development of Afram Plains."

Government to reclaim mined-out areas in Ghana
54 minutes ago