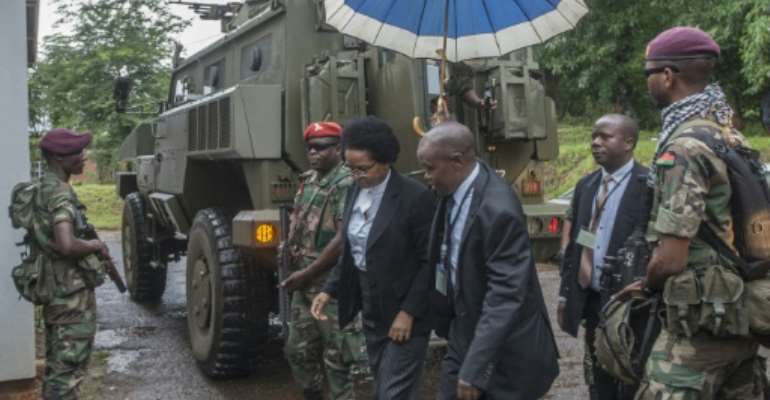 Ivy Kamanga, one of Malawi's five constitutional court judges, who were given an armoured military escort on February 3 when they made their historic ruling. By AMOS GUMULIRA (AFP/File)

The London-based think-tank Chatham House lauded the judges for bravery and independence after they cancelled the re-election of then incumbent Peter Mutharika in a historic decision for elections in Africa.

The Chatham House Prize is annually awarded for "the most significant contribution to the improvement of international relations."

They ordered new elections, which were held on June 23 and won by opposition leader Lazarus Chakwera.

Chatham House director Robin Niblett said "the Malawi ruling is unprecedented in a country where past elections have been marred by irregularities, electoral fraud and violence."

"The judges successfully asserted their independence in the face of significant pressures and the power of incumbency," he said.

Clad in bullet-proof vests, the judges were driven to court in a military armoured vehicle to deliver the ruling.

During their six-month-long hearing, there were what Chatham House described as "high-level bribery attempts and threats" directed at the judges.

The February 3 ruling "upheld the constitution and defended citizens' democratic rights in the most difficult circumstances," it said.

"At a time when standards of democratic governance are under threat not only in Africa, but in many democracies, Malawi's constitutional court judges set an example for their peers across the world by upholding the centrality of the rule of law and separation of powers."

A University of Malawi law professor, Sunduzwayo Madise said the prize was "a recognition that despite challenges, the country's democracy is maturing".

The impoverished country is just the second in sub-Saharan Africa to have had presidential election results overturned in court, after Kenya in 2017. The election of Chakwera was also the first time in Africa that an election re-run has led to the defeat of an incumbent.