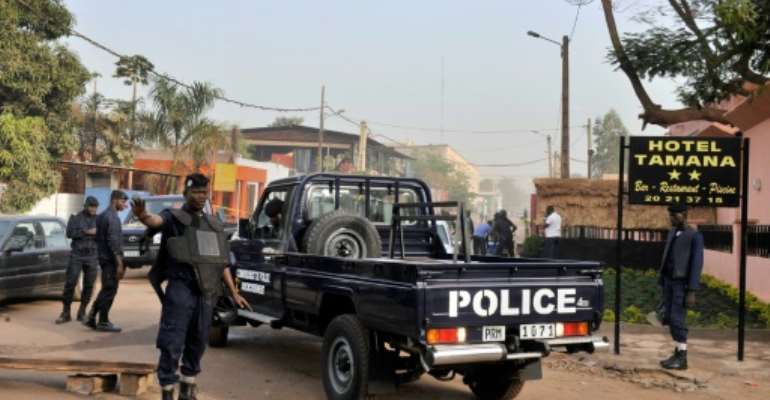 In March 2015, gunmen sprayed bullets at La Terrasse nightclub in the capital Bamako and tossed a grenade inside, killing five people. By HABIBOU KOUYATE (AFP/File)

A Malian court opened proceedings Tuesday against alleged Islamists who are accused of killing over two dozen people in attacks targeting foreigners in 2015, in a rare terror trial in the Sahel state.

The attacks in the capital Bamako were among the first to explicitly target Westerners in Mali, which has been gripped by a brutal jihadist insurgency since 2012.

In March 2015, gunmen sprayed bullets at La Terrasse nightclub and tossed a grenade inside. A Frenchman, a Belgian and three Malians were killed.

Then in November, gunmen took guests and staff hostage at the 190-room Radisson Blu hotel in a siege that left 20 people dead, including 14 foreigners.

On Tuesday, hooded guards led primary suspect Fawaz Ould Ahmed to the dock in a Bamako courtroom where survivors of the attack were present. Elite soldiers guarded the courthouse's perimeter.

He stands accused of personally shooting the victims of the nightclub attack, using an assault rife, as revenge for French satirical magazine Charlie Hebdo publishing cartoons of the Prophet Mohammed.

Earlier in 2015, Islamist gunmen in Paris killed 12 people at Charlie Hebdo's offices over the publication of the caricatures.

The full-bearded suspect, who was dressed in a long traditional grey robe, told lawyers on Tuesday that he preferred to address the court in Arabic.

Family members of the Western victims were not present in court. However, some could follow the proceedings from abroad via live videolink.

It is unclear how long the trial will last. The court is also examining charges against two other men, besides Ould Ahmed, as part of the trial.

Such court proceedings are rare in Africa's vast and conflict-ridden Sahel region, where borders are porous and state control weak in the face of a widening jihadist revolt.

Mali has been struggling to contain a jihadist revolt that first emerged in the north, before spreading to the centre of the country and neighbouring Burkina Faso and Niger.

Jihadists in the Sahel-wide insurgency mainly wage war on soldiers and government officials -- both symbols of state power.

But they also target Westerners: either kidnapping them for ransom or attacking popular expatriate haunts such as hotels or bars.