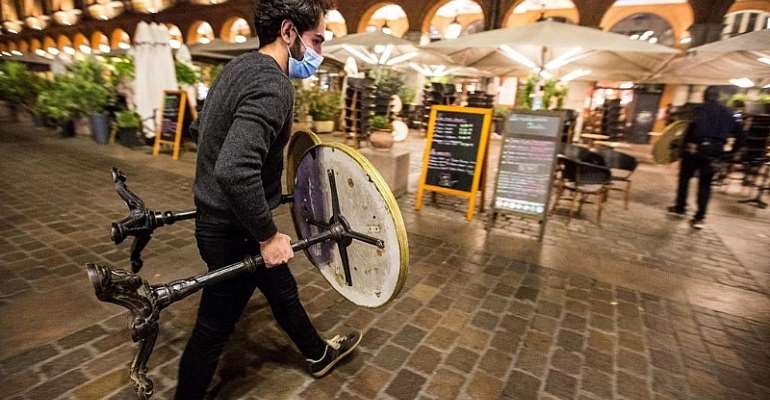 The people of France have been told to “expect tough decisions” as President Emmanuel Macron hosts two emergency Defence Council meetings to discuss hardening restrictions against a brutal second wave of coronavirus.

Weekend lockdowns in areas where the virus is dangerously active, and bringing forward an existing 9pm curfew by two or more hours are “likely” scenarios reportedly being considered.

Other options include local confinements, the closure of non-essential businesses – dubbed an "economically compatible" lockdown – and rules obliging older people to stay home.

While the government is adamant that nothing is being excluded, Macron has previously said he hoped to avoid a second nationwide lockdown given the heavy economic and psychological consequences such a move would bring.

A second session is slated for Wednesday – with an announcement of new measures expected to follow in the evening.

Speaking on French radio Tuesday morning Darmanin told France Inter that residents should be prepared for some “difficult decisions”, while Labour Minister Elisabeth Borne told France Info: “The situation is serious, and it means we'll have to adopt new measures quickly."

Worst hit in Europe
The rate of Covid-19 infections in France – which has the highest number of confirmed cases in Europe – has climbed past the 1 million mark despite measures targeting virus hotspots. The tally has also brought the health system under renewed stress.

Health Ministry figures Monday showed France has almost 18,000 coronavirus patients in its hospitals, compared with more than 32,000 at the height of epidemic in April, when the country was in the middle of a strict eight-week lockdown.

The impending new restrictions are expected to take effect from 1 November, at the end of the school holidays, when many families will be returning from vacation.

Akufo-Addo not bound to nominate recommended MMDCE hopefuls ...
31 minutes ago