Orangutan Blood: A Warning For Human Blood Not Be Mixed With Orangutans. A story condemning anti blackness in South Asian communities. 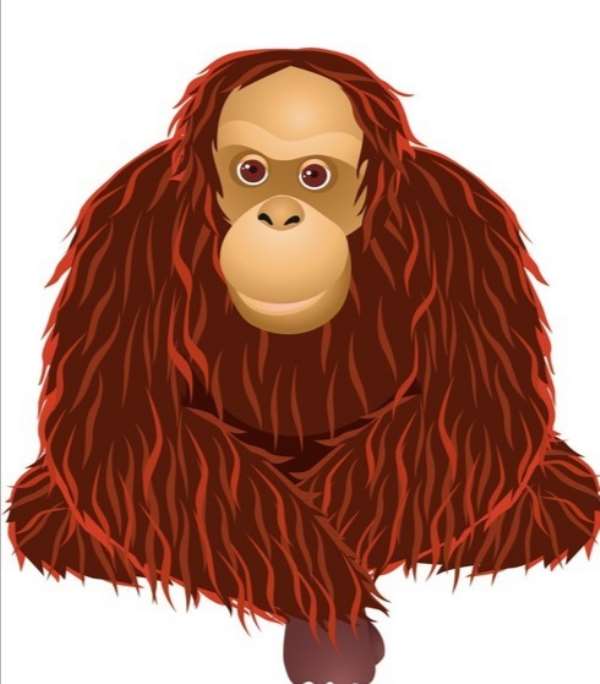 Once upon a time, there lived an ugly woman, a dirty woman, a cursed evil woman in Bangladeish on a border to Pakistatan. The modern city of Atlantis was tired of this evil woman and her causing trouble for the inhabitants of the town. So they chased her out of the town with knives and guns into a jungle. Yet they spared her life. The woman didn't mind the jungle I mean she was nameless and called that evil woman. Nobody would marry her for fear of being cursed and given birth to children who wouldn't even be suitable to become faeces. Nobody talked to her because she would cast a spell with every word to make their life miserable. In the jungle, she slept in trees and on the ground and ate wild berries by trapping them. Even the wild berries moved away when she came to eat them terrified of the evil she emitted.

One day she stumbled unto a tribe of Orangutans. The Orangutans were initially terrified and revolted never had anything so disgusting stumbled into their tree forest country. They thought she was from the devilish planes of the underworld of Hades. Where cursed souls not allowed to die were brought back to life to terrorise the planet. She looked like frankestein of a brown shade in woman form and a bat with a human physique. Fortunately for miss Nameless the Orangutans had a deal for her. They would give her Belzebubb Orangutan who was so disfigured that flies mistook his unscarred natural face for rotten food and sores they could lay on. Belzebubb was so short he was called the dwarf monkey and so ruthless if the monkeys knew of Hitler they would have called him Hitler's Orangutan. She agreed excited at the prospect of mating with anything for the first time. Belzebubb Orangutan wasn't so pleased even he didn't want to be saddled with nameless. Yet the Monkeys threatened to kill him if he didn't comply. So begrudgingly he left with nameless.

Once Nameless built a treehouse for them out of twigs and leaves. She began to jump on and try to entice Belzebubb Orangutan who wasn't interested. He just laid there while she jumped on him ferociously screaming out of excitement. After a couple of months of a one-sided intimate relationship. Nameless fell pregnant. Belzebubb Orangutan finally runs away when he heard the news. He didn't want to be stuck with a curse as a child. Nameless gave birth all alone. She gave birth to a son who can only be described as the worse looking thing in the world. She named him Uspussyman because he didn't deserve the penis manhood had bestowed upon him. She knew he would never be a man.

Uspussyman grew up to look like a deformed pitbull even more repulsive than his nameless mother and his rotten looking Orangutan father. He was tiny and couldn't fathom the penis that swung up and down on his crooked body. His disgust at the mirror made him crueller than his mother and his Hitler monkey dad. One day a huge wave from the sea swept Uspussyman and Nameless to the SwanlessSea county in Grand Britannia. Uspussyman became the owner of a store called Exorcistoxica. Where rotten fruit and shoddy items were sold. He treated his workers like slaves. He was racist, mean, unkind and demonic even with his ghastly appearance and zombie-like personality he thought he was fine enough to look down on people. Like mother, father, son was stupid and ignorant.

One day a beautiful princess Amina entered Uspussyman's store she didn't even look him in the eye because she didn't want to spoil her eyesight. The princess was from nubia so dark, so striking. Uspussyman wanted to seduce and have his way with her but she was uninterested. She brought a broken cooking utensil from Uspussyman the crook. Once Amina realised the utensil was unsuitable. She tried to return the utensil but Uspussyman jealous of Amina's beauty and grace refused and lied that Amina didn't buy it there. He started recording her on his broken old crusted smartphone not meant for an idiot like him. So he could go and manage measly masturbation because his half-monkey and half-human penis couldn't produce real semen. Amina got angry and told him to leave her alone. He threatens to call the prolice he thought institutional Racism was on his lighter shaded side. He was right. Amina raised a defence to the cops who wanted to catch her riding dirty already that Uspussyman was recording her. She left Exorcistoxica to calm down. Uspussyman followed her to provoke her still recoding her and she hit Uspussyman with the cooking utensil. Yet Amina got in trouble with a warning saying she assaulted Uspussyman who was laughing the whole time.

Amina cursed Uspussyman with an ancient voodoo ritual from Nubia that for the rest of his life he and his entire already cursed family will never experience joy, happiness, peace, humanity, love or anything good in this world. That his bloodline will continue to be cursed for always and eternity. Whoever helped him wrongly accuse Amina too. So today Uspussyman walks the earth with a life long of nothing accomplished, misery and a face that warns others to stay away from me I'm inside and out ugly.