Protests break out in Italy over tougher anti-virus measures 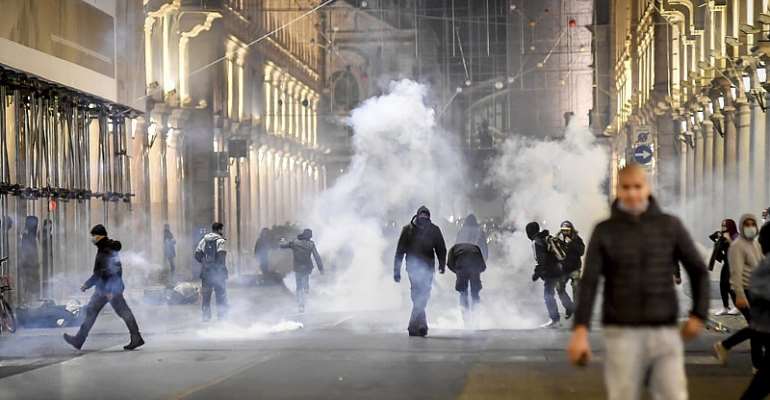 Police in Italy have used teargas against thousands of protestors angry over new restrictions to control the spread of coronavirus, as European governments toughened their responses to the contagion.

In Milan, several trams were vandalised and bins set on fire, while anti-riot police fired teargas at groups of young people throwing glass bottles and other projectiles. Similar scenes erupted in southern Naples and in Turin where luxury goods shops, including a Gucci fashion outlet, were ransacked.

The scenes of unrest came after Italian Prime Minister Giuseppe Conte ordered restaurants and bars to shut from 6:00 pm, while theatres, cinemas and gyms were ordered to close for a month, angering business owners, opposition politicians and even some scientists.

Conte told citizens on Monday that he hoped the new restrictions "will allow us to be more relaxed by Christmas", but warned "hugging and partying" would remain out of the question.

The violence in Italy, which imposed one of the toughest lockdowns in the first wave of infections in March and April, came as the head of the World Health Organization urged countries “not to give up” in their fight to contain the virus.

But the protests  threatened to reverberate around Europe where governments are weighing the need for tougher measures against the fatigue and frustration felt by many.

Maria Van Kerkhove, the WHO's technical expert on the pandemic, also voiced concern about the situation in Europe – and in particular a surge in hospitalisations and rapidly filling intensive care units.

"In many cities we're seeing beds filling up too quickly, and we're seeing many projections saying the ICU beds will reach capacity in the coming days and weeks," she told Monday's briefing.

Meanwhile, the Czech Republic said it would impose a night-time curfew, mimicking measures already introduced in France and Spain; Slovenia has imposed border closures, while even Norway, with one of Europe's lowest infection rates, tightened its rules on social gatherings on Monday.

France is also bracing for harsher measures with President Emmanuel Macron gathering his top ministers Tuesday to review efforts to curtail the outbreak after the number of daily cases topped over 50,000 for the first time at the weekend.

Interior minister Gerard Darmanin warned on Tuesday that France should “expect difficult decisions” although he “didn't know exactly what they would be”.

Some options reportedly being considered included weekend lockdowns in high-infection areas, an earlier night-time curfew, or even another general country-wide stay-at-home order.