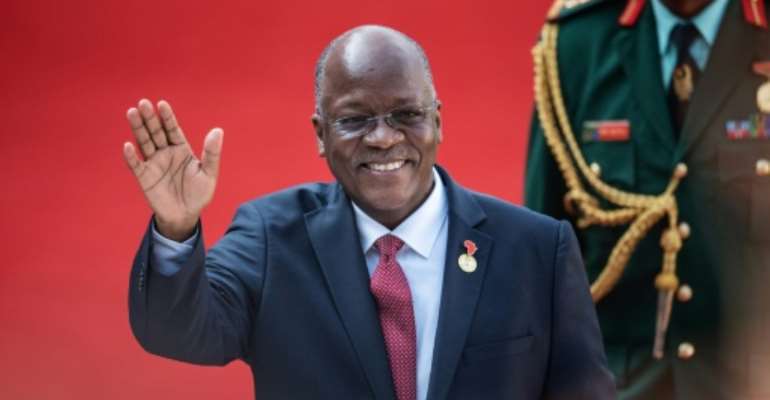 Magufuli's supporters praise an energetic infrastructure drive as well as a shake-up in the mining industry. By Michele Spatari (AFP)

Tanzanian President John Magufuli came to power as a no-nonsense man of the people nicknamed The Bulldozer, but along with popular efforts to clean up graft, he has been accused of crushing dissent and stifling democracy.

The 60-year-old was elected on a fiery anti-corruption stance which endeared him to a population weary of corruption scandals under his predecessor.

He quickly took wildly popular decisions, such as scrapping lavish independence day celebrations in favour of a street clean-up and banning unnecessary foreign trips for officials.

Several headline-grabbing incidents saw him showing up in person to demand why civil servants were not at their desks, while in one case officials were briefly jailed for lateness.

Dozens of officials implicated in corruption were suspended and the hashtag #WhatWouldMagufuliDo spread like wildfire on social media.

However his tendency to flout due process and act on a whim alarmed foreign allies over the squeezing of democracy in one of East Africa's most stable nations.

"I think he is actually bulldozing everything, laws, human rights, everything," said Aikande Kwayu, a Tanzanian political analyst.

At the start of his term, Magufuli banned political rallies -- saying it was time for work, and not politics -- and cut live coverage of parliament sessions.

A series of tough media laws were passed while arrests of journalists, activists and opposition members soared, and several opposition figures were killed. 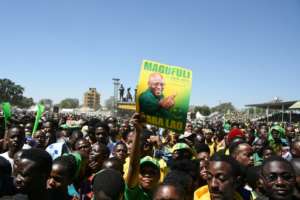 President John Magufuli intially inspired with a crackdown on corruption but has since taken an authoritarian turn. By ERICKY BONIPHACE (AFP/File)

Magufuli called for teenage mothers to be kicked out of schools, while rights groups slammed an unprecedented crackdown on the LGBT community under his rule.

When a local advocacy group published an opinion poll showing his popularity had plunged from 96 percent at the beginning of his term to 55 percent in 2018, its director had his passport confiscated and further polls were banned.

And when opposition leader Zitto Kabwe questioned growth statistics, he was arrested.

Ringisai Chikohomero, a researcher with the Pretoria-based Institute for Security Studies (ISS) said that to Magufuli, "the end justifies the means".

"He is a person who believes in what we call guided democracy. For Magufuli, the state and the president have the last say and he treats the citizens like children... there is no room for participatory consultation," he said.

For many observers, Magufuli's handling of the coronavirus crisis cast his leadership style into sharp relief.

He urged prayer instead of face masks, before stopping the publication of statistics in April when the country had recorded 509 cases and 16 deaths. 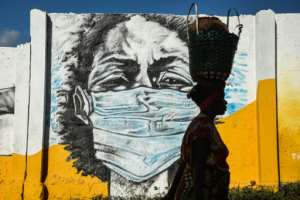 A Tanzanian woman walks in front of a mural painted by the Wachata artists group to raise awareness about avoiding the spread of coronavirus. Magufuli has claimed prayer saved the country from Covid-19. By Ericky BONIPHACE (AFP/File)

In May he revealed he had submitted a variety of fruit and animals to be tested for the virus and that a papaya, quail and goat tested positive, revealing "sabotage" at the national laboratory.

He has since claimed prayer saved the country from Covid-19.

"That's why we are all not wearing face masks here. You think we don't fear dying? It's because there is no Covid-19," he said.

In July, the country's already tough online content laws were amended to ban publication "on deadly or contagious diseases" without official permission.

'The leader we needed'

Magufuli's supporters praise his crackdown on corruption, an energetic infrastructure drive as well as a shake-up in the mining industry which has seen him renegotiating contracts with foreign companies to improve the country's share in its own resources.

"He is the kind of leader we needed at this time when corruption was rampant," said 32-year-old restaurant owner Agnes Thomas.

"He created discipline among the civil servants."

Magufuli expanded free education, increased rural electrification and embarked on the construction of a key railway and a massive hydropower dam set to double electricity output in the country.

However aggressive taxation has squeezed the private sector, and worsened the environment for doing business.

"For a trader like me, Magufuli is not a good person because things are not easily moving. Tax officials are even more strict while businesses are not growing at all," said Musa Hemed, who owns a shop selling building materials.

Magufuli was born in Tanzania's northwestern Chato district, on the shores of Lake Victoria, where he grew up in a grass-thatched home, herding cattle and selling milk and fish to support his family.

"I know what it means to be poor," he has often said.

He was awarded a doctorate in chemistry from the University of Dar es Salaam and also spent some time studying at Britain's University of Salford.

He is a member of the ruling Chama Cha Mapinduzi (CCM) party, which has been in power since independence.

A member of parliament since 1995 and a devout Roman Catholic, he held various cabinet portfolios, including livestock, fisheries and public works, where he earned the "Bulldozer" moniker.

Magufuli is married with five children.