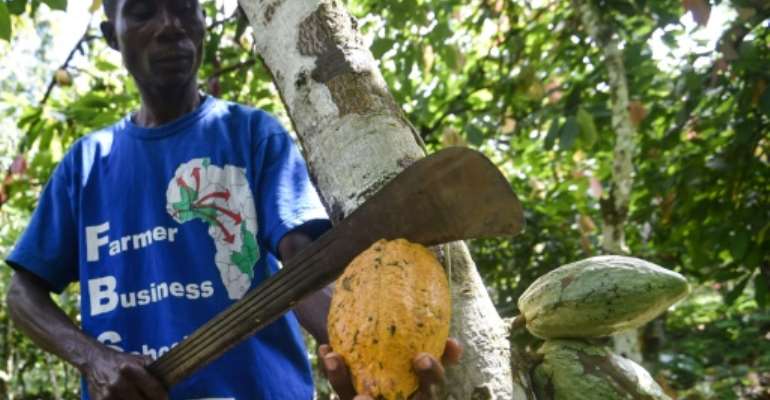 Cacao is still the mainstay of the Ivorian economy, despite impressive growth in services. By SIA KAMBOU (AFP)

Ivorian President Alassane Ouattara is seeking re-election on Saturday, campaigning on his record of economic growth and stability in a country shaken by a civil war nearly a decade ago.

Analysts looking at Ouattara's claims say Ivory Coast's economy has indeed enjoyed strong growth -- the World Bank in August described it as "one of the best performing" south of the Sahara.

But its weaknesses are widespread poverty and income inequality, the fallout of the coronavirus pandemic and the uncertainties of the presidential ballot itself.

Ouattara, who came to power in 2011 after bloody post-election conflict, is accused by critics of sidestepping constitutional constraints in seeking a third term in office.

Growth since 2011 has been around seven to eight percent annually, driven especially by telecoms and other services, and supported by heavy infrastructure investment, in electricity, roads and drinking water.

Agriculture remains a mainstay, especially cacao, of which Ivory Coast is the world's biggest producer, with 40 percent of the market. Cacao and its derivatives account for 15 percent of GDP, according to the World Bank.

"The Ivorian economy has experienced structural change, but is still too dependent on the public sector. The private sector still does not have enough heft to take over," said Youssouf Carius of investment company Pulsar Partners.

In August, Ouattara said his government had "reversed the poverty curve, which is in clear decline".

But other figures show this picture is rather more nuanced.

As the country's population has risen from 20 to 25 million over the same period, there are still 10 million people in poverty, against 11 million a decade ago.

And precarity is widespread -- as many as 90 percent of jobs are in the informal sector.

"Poverty remains a challenge," the World Bank said, pointing out that Ivory Coast lags behind other countries in the region, and other low-middle-income economies, in education and health.

In 2019, as the elections approached, Ouattara launched a billion-dollar two-year poverty alleviation plan, with help for the poorest households.

But within months, coronavirus struck.

Growth in 2020 is expected to fall to 1.8 percent because of the pandemic, with small companies bearing the brunt. More than two-thirds of families are struggling to meet basic needs.

Abidjan's popular Adjame market was among retail outlets that were shuttered in March when Ivory Coast imposed anti-coronavirus restrictions, since eased. By ISSOUF SANOGO (AFP)

However, there could be a rebound to five percent growth next year, which may approach pre-crisis levels in subsequent years.

The government has mustered "an economic, social and humanitarian support plan" for 2020-21, amounting to up to five percent of GDP.

Keys to the rebound are keeping the coronavirus outbreak under control locally, the World Bank said. "Social tensions" could be generated by the pandemic, "especially with the approaching elections," it warned.

Akufo-Addo, Bawumia responsible for 60% of Ghana’s total pub...
33 seconds ago

Anti-LGBTQI+bill not to engender hatred for persons, meant t...
2 hours ago