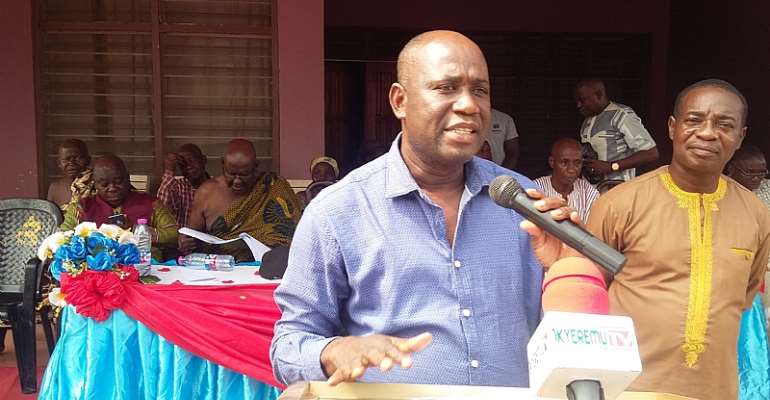 The deputy minister for Local Government and Member of Parliament for Offinso, Hon. Collins Ntim has paid a working visit to the Asante Akim North District Assembly at Agogo in the Ashanti Region.

The visit was meant among others, to monitor the activities in the district especially in the areas of government flagship programs in the agricultural sector.

In a presentation, the District Director of Agriculture for Asante Akim North, Mr. Eric Dwomoh stated that food production in the district has increased tremendously despite covid -19 pandemic

He further stated that farmers now have easy access to improved seeds, fertilizers, and extension officers which have resulted in the increase in yield in metric tons.

On the other hand, Mr. Dwomoh stated that the department has been organizing sensitization programs to educate farmers about the fall armyworm and the best farming practices that will ensure that the worms do not destroy their produce.

According to the Director, one of the major challenges facing farmers in the district is the unfavorable rainfall conditions and therefore pleaded with the minister to consider the District in the One District One Dam program of the government to sustain production in the district.

He however pleaded with the Hon. Minister to provide machines to farmers to enable them to produce on large scale and also consider the processing of plantain in the district because of the large quantity of plantain produced in the district.

The minister was impressed with the presentation by the District Director of agriculture and urged the Staff in the district to do their best in their field of work to help the government achieve its aim of developing rural communities in the country.

He pledged his support to the District especially to farmers to enable them to enjoy the fruit of their labor and also see farming as a job.