Akufo-Addo Is A 'Man Of His Words' – Prang Paramount Chief 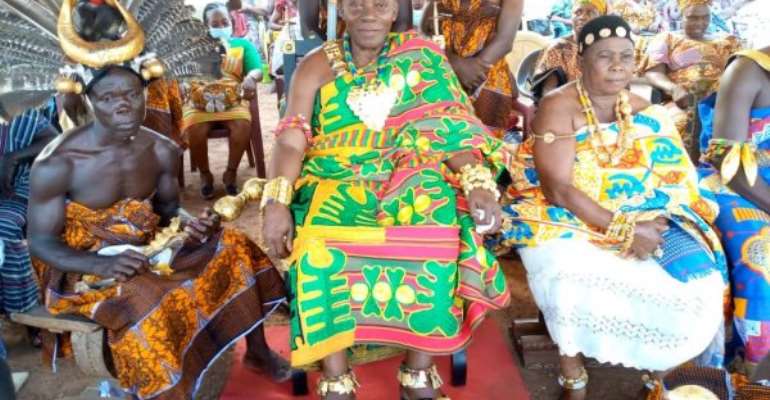 Nana Kwadwo Nyarko III, the Paramount Chief of Prang in the Pru West District of Bono East Region has endorsed President Akufo-Addo, describing him as a 'man of his words”.

He, therefore, lobbied Ghanaians to support his government to enable him to achieve his vision for the nation.

“The inspiring leadership of the President in containing the spread of the COVID-19, the fulfilment of his Election 2016 manifesto and creating the Pru West District demonstrates his vision to build a better Ghana”, he said.

Speaking at a grand durbar to climax the 'Nkyifie' yam festival of the chiefs and people of Prang, Nana Nyarko III said the Pru West District had witnessed tremendous development and commended the President in that regard.

The theme for the one-week festival was “Sustaining Peace, Progress and Development” and attracted people from all walks of life to promote family unity and galvanize support to push the development of the area.

Nana Nyarko III indicated that the government had addressed the perennial water shortage in the area through the construction of a small town water project, benefited from the One-District-One-Factory (1D1F) project and access roads.

He said the Planting for Food and Jobs (PfFJs) Programme had also provided decent jobs for the youth in the area and reminded President Akufo-Addo to fulfil his promise to construct a district hospital in the area.

“We have nothing to offer in return only to praise the President and we prayed the Almighty God would provide all his heart desires and give him long life and wisdom to govern the nation in godly fear”, the Paramount Chief stated.

Nana Nyarko III, however, appealed to the government to construct the Prang-Abease- Kintampo road to boost the economic activities of the people.

Mr. Stephen Jalula, the Pru West District Chief Executive appealed to the people to cherish and preserve the prevailing peace of the area, saying, it was only under an atmosphere of peace that development could thrive in the communities.

He expressed the hope that followers of political parties in the area would be decorous in the electioneering and avoid tendencies that could trigger violence and disturb peace before, during and after the general election.

Mr. Jalula told the people to vote for President Akufo-Addo to pave the way for his next government to push the development of the nation to the next level and witness significant improvement in their living conditions.