Anger over Italy virus rules as curfews enforced around Europe

By Ella IDE and Joseph Boyle with AFP bureaus 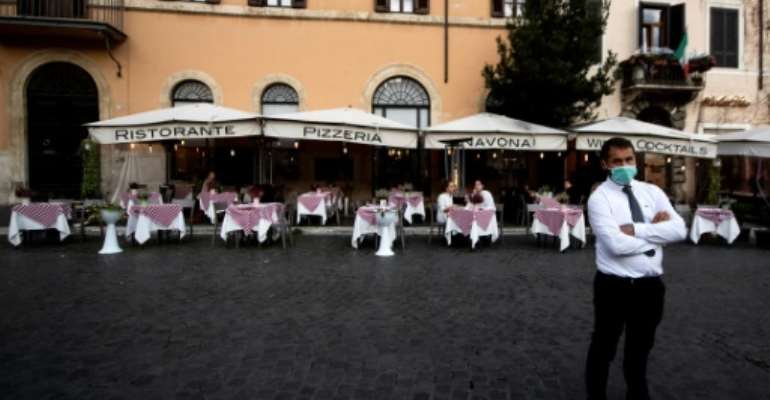 Restaurateurs and bar-owners fear the new round of restrictions in Italy will be the end for them. By Tiziana FABI (AFP)

Italian officials faced a backlash on Monday after imposing coronavirus restrictions aimed at "saving Christmas" as other hard-hit countries enforced curfews in a bid to avoid fresh national lockdowns.

Italian Prime Minister Giuseppe Conte ordered restaurants and bars to shut from 6:00 pm and closed theatres, cinemas and gyms for a month -- much to the annoyance of business owners, opposition politicians and even some scientists, who questioned whether it would be enough to stop the virus.

"These restrictions will be the end of us," said restaurateur Giuseppe Tonon, 70, the owner of a restaurant in Oderzo, a small village in northeastern Italy. "We're not in a city centre, we're in the provinces. Our customers come in the evening or during the weekend."

A photograph of Tonon slumped in despair went viral on social media on the weekend, striking a chord not just with Italians but also with people across Europe.

Spain and France have both stiffened their rules, Slovenia has imposed border closures and even Norway, with one of Europe's lowest infection rates, tightened its rules on social gatherings on Monday.

France is bracing for harsher measures with President Emmanuel Macron set to gather his top ministers Tuesday to review efforts to curtail the outbreak after the number of daily cases topped 50,000 for the first time.

The economic fallout continues to be severe, with tens of millions losing jobs and economies tanking across the world, and politicians are struggling to find answers.

US President Donald Trump, with his re-election campaign in full swing, was once again on the backfoot after one of his senior officials suggested his government would not control the virus -- comments seized on by challenger Joe Biden.

US President Donald Trump, seen here at a rally in Pennsylvania on Monday, claimed the US was 'rounding the corner'.. By SAUL LOEB (AFP)

"We're absolutely rounding the corner," said Trump, denying he was giving up on the virus fight even as his country smashed its own dismal record for new daily cases on the weekend.

In response, the World Health Organization chief Tedros Adhanom Ghebreyesus warned "giving up on control" of the pandemic was "dangerous".

Europeans meanwhile were facing up to the thorny practicalities of doing politics as the pandemic surges.

The European Union said it would scale back meetings of experts and senior officials, and German Chancellor Angela Merkel's CDU party said it would delay a congress planned for early December to choose a new leader.

Facing down his critics in Italy, Conte told citizens he hoped the restrictions "will allow us to be more relaxed by Christmas", but warned "hugging and partying" remain out of the question.

The newspapers poked fun at the prime minister, with Corriere della Sera's front page featuring a cartoon Conte telling Father Christmas: "Stop! We've brought in a decree to save you!"

But restaurant and bar owners were not laughing. The early closing times mean Italy's bustling aperitivo hour is gone, as are dinners out.

And Italy's foremost film directors wrote an open letter warning that by closing cinemas the measures risked "jeopardising the future of an entire sector", and Italian conductor Riccardo Muti said the move would harm people's health.

Far-right opposition leader Matteo Salvini said he was preparing a legal challenge, but the WHO's adviser to Rome Walter Ricciardi said the new rules may "not be enough" to stop the virus.

The anger in Italy could not match the mass ransacking of warehouses in Nigeria's capital Abuja, where the impoverished carted off supplies earmarked for distribution during the coronavirus lockdowns.

"We are hungry, you understand," a man with a package of noodles in his hand told AFP. "We are not stealing, it's our food and our right."

While cases and deaths remain higher in the Americas than in any other global region, the spikes in cases are causing most alarm in Europe.

Melbourne has reported no new coronavirus cases after months of restrictions. By William WEST (AFP)

Spain has announced a state of emergency giving regions the power to limit movement and extend curfews and France has expanded night curfews to cover roughly 46 million people.

Paris has said it wants to avoid another outright lockdown but "tougher measures" will be on the table when ministers meet President Macron on Wednesday, officials told AFP.

The alarm was also being raised in less severely affected countries, including Denmark where there were more than 1,000 daily cases for the first time.

Australia provided a glimmer of hope for beleaguered Europeans, with the second city of Melbourne registering no daily cases and preparing to exit one of the world's most severe lockdowns.

The city's residents have been under stay-at-home orders for nearly four months but with new cases falling dramatically, the state's politicians had been under pressure to lift the measures.