Insights from Morocco into how smartphones support migration

By Moha Ennaji - The Conversation 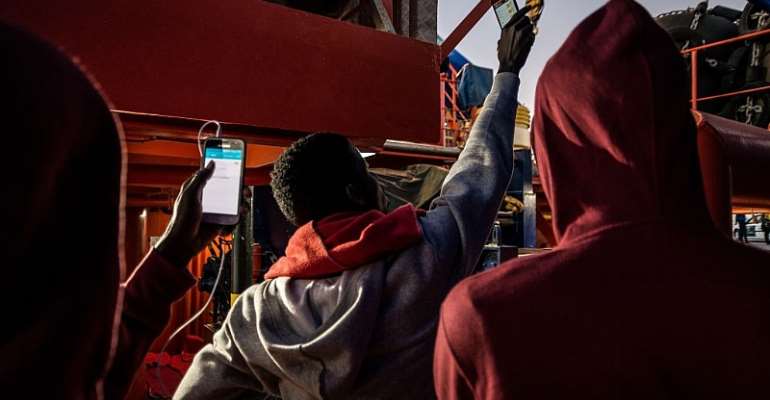 Migrants try to get network on their phones in Algeciras, Spain. - Source: Photo by Ignacio Marin/Anadolu Agency/Getty Images

For undocumented migrants and refugees, accurate information is vital. Because of this, smartphones – mobile phones that perform many of the functions of a computer, like accessing the internet – have become an important tool. They give migrants access to applications such as Google maps, WhatsApp, Facebook, and Twitter. These can provide them with information from social media and close contacts.

In a recent study , my colleague Filippo Bignami and I investigated the role of smartphones in irregular migration. We wanted to know how they helped migrants reach their destination and what kind of information migrants accessed using them. Our focus was on sub-Saharan migrants arriving in Morocco, specifically in the city of Fès, on their way to Europe.

We found that smartphones supported migration flows by providing migrants with access to online information before and during travel and when they arrived at their destination country. They affected their migration routes and choice of final destination. They also helped migrants to share information with each other.

The smartphones were equally used by traffickers. They allowed them to contact prospective irregular migrants and provide them with information.

From what we've seen, smartphones are being increasingly used to minimise risks and address migration challenges. Policymakers can use this information to better support their journey, and ensure their safety, by engaging them through smartphone applications.

We first investigated how the use of smartphones and social media influenced migration journeys. Then we explored how they influenced decisions regarding their final destinations. Finally we looked at how they affected the financing of migration.

To do this, we conducted interviews with 27 migrants from January 2017 until March 2018 and followed them for a period between 4 and 8 months.

We met the migrants in the neighbourhoods where they lived, in streets, and cafes. They gave us information about their use of technology, migratory routes, demographic and socio-economic profiles, daily lives, relations with society and their migratory project.

It made sense for us to focus our study on Morocco which, since the mid-2000s, has been a transit country for many refugees and African migrants wishing to reach Europe. They do this either through the Spanish enclaves of Ceuta and Melilla, or through the Canary Islands.

It's estimated that migrants come from over 10 countries in Africa, in particular; Nigeria, Mali, Senegal, Congo and Cote d'Ivoire, Togo, Guinea, Benin, Ghana, Niger, and Cameroon. According to Morocco's Statistics Office , between 15,000 and 25,000 African migrants enter Morocco each year. Many aren't able to complete the trip, and stay in Morocco, but each year it's believed that over 8,000 irregular sub-Saharan migrants cross to Spain.

We found that the intention to migrate was significantly influenced by mobile technologies in addition to the traditional push-factors, such as conflict, civil war, economic hardship, and family impact.

Smartphones made the process relatively faster and smoother. They guided migrants in their quest to reach their destinations. For instance, they used Google to access news or maps which provided them with information on the directions to take to reach their destination country. These applications could also show when the best time, or place, was for border crossings.

If migrants were in difficulty or lost they could use the phones to ask for help. They used specific applications like WhatsApp or Messenger for communication.

These apps were also key for the migrants to stay in touch with family, friends and traffickers. Aside from emotional support, this was an important way in which migrants could continue to finance their travels. As one interviewee stated:

When I need money I make a call to my parents through WhatsApp, and they send it via Western Union really fast.

The phones also provided for cooperation and communication between migrants. They helped each other choose the safest routes and share other information.

The accessibility of smartphones made some migrants more confident and independent. Because of their access to information, some were making their journeys without smugglers.

When they reached their destination, the sharing of news and photos about their journey – and how they managed to cross borders – motivated more young people to migrate.

And it's not just migrants that use them. Smartphones allowed traffickers to recruit prospective immigrants and quickly disseminate information.

We have seen evidence of how mobile technologies are transforming societies, migration processes, migrants' lives, their social aspirations, and migration movements.

This information could be used to develop policies to protect migrants' rights and to support migrants' participation and integration. Such knowledge is a good starting point for policy-making to revise the current regulations, so as to integrate the migrants in education, health care and housing facilities, the job market, and other sectors.

Thus, smartphones and social media are reshaping not only migration movements but also migration policies with the daily use of mobile technologies.

Moha Ennaji's most recent books are “Managing Cultural Diversity in the Mediterranean Region” and “Muslim Moroccan Migrants in Europe”.

Moha Ennaji does not work for, consult, own shares in or receive funding from any company or organisation that would benefit from this article, and has disclosed no relevant affiliations beyond their academic appointment.

Latest Photo Reports
Catch up with all the political quotes from our politicians.
Advertise here
More Article
ModernGhana Links
Energy transitions: The role of institutions and market structures
Accountants can reduce the environmental impact of mining: pointers for South Africa
How multicultural churches in South Africa are breaking down race barriers
Nigerians refer to violence as 'intergroup conflict': what's actually at play is xenophobia
The making -- and then breaking -- of South Africa's Robben Island Museum
Isaac Adongo writes: Under Akufo-Addo the average man's hand goes towards the mouth to drive away flies, not to put food into the mouth
My early memories of the Kumasi Academy Class of 1976
George Andah's call for unity and acceptance: A sign of good leadership
The genocide of signed languages: protecting the linguistic rights of Africa's deaf children
TOP STORIES