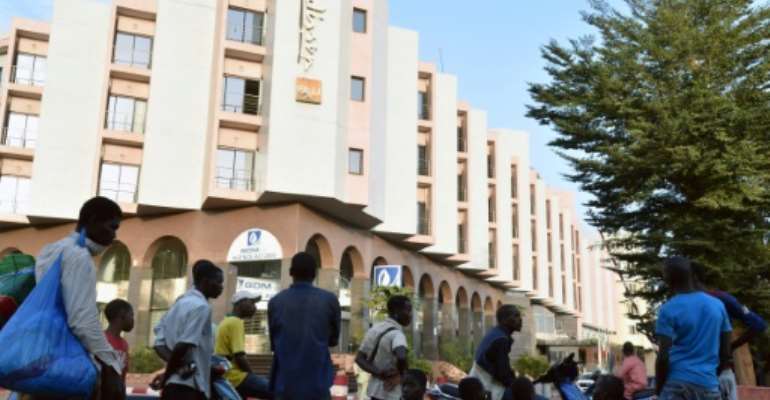 The day after the November 2015 jihadist attack on the Radisson Blu hotel, where 20 people were killed. By Issouf SANOGO (AFP/File)

A Malian court on Tuesday will launch proceedings against alleged Islamists who killed more than two dozen people in 2015 in attacks targeting foreigners.

The trial is a rare event in Africa's vast and conflict-ridden Sahel region, where borders are porous and state control weak in the face of a widening jihadist revolt.

In March 2015, gunmen sprayed bullets at La Terrasse nightclub in the capital Bamako and tossed a grenade inside. A Frenchman, a Belgian and three Malians were killed.

Then in November, gunmen took guests and staff hostage at the 190-room Radisson Blu hotel in a siege that left 20 people dead.

The shocking attacks were among the first to explicitly target westerners in Mali, which has been gripped by a brutal jihadist insurgency since 2012.

Fawaz Ould Ahmed, a Mauritanian national, is the suspected mastermind behind the 2015 attacks.

He is also suspected of "planning and executing" the Radisson Blu attack.

A much-anticipated trial over the 2015 Charlie Hebdo killings began in Paris last month.

Born in the late 1970s, the Mauritanian has a heavy-set physique and once made his living as a trader.

According to police files seen by AFP, he travelled to the Sahara desert in neighbouring Algeria in 2006 to join Mokhtar Belmokhtar, a notorious one-eyed militant.

Ould Ahmed then took part in the kidnap of two Canadian diplomats in Niger in 2008, the files say, and afterwards criss-crossed the Sahel on errands including arms procurement and mediating hostage negotiations.

He kept low profile after the 2015 attacks, but Malian security services arrested him in Bamako the following year.

Two other men, both Malians in their twenties, are due to stand trial alongside him.

One is Sadou Chaka, whom investigators say transported weapons as part of the Radisson Blu killings.

According to trial documents, the other Malian, Abdoulbaki Abdramane Maiga, stands accused of having undergone paramilitary training and of financing terror attacks -- although he is not directly implicated in the 2015 attacks.

Mali has been struggling to contain a jihadist revolt that first emerged in the north, before spreading to the centre of the country and neighbouring Burkina Faso and Niger.

Jihadists in the Sahel-wide insurgency mainly wage war on soldiers and government officials -- both symbols of state power.

But they also target Westerners: either kidnapping them for ransom or attacking popular expatriate haunts such as hotels or bars.

Mali's government this month swapped some 200 detainees -- some of them thought to be jihadists -- for four hostages held by Sahel Islamist groups.

Sophie Petronin, the last remaining French hostage in the world, was freed as part of that deal.