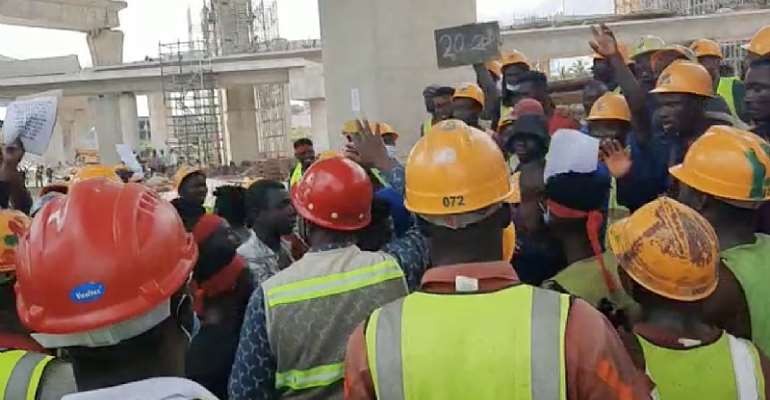 Workers with the Bridge department on the Pokuase Interchange project have called off their strike.

The workers on Thursday, October 22, 2020, embarked on a sit-down strike to demand a 75 percent increment in their daily wage of GHS20.20.

According to them, their paymasters have agreed to pay them an amount of 100 Ghana cedis monthly in addition to their salaries as negotiation continues for better remuneration.

In an interview with Citi News, the secretary of the workers union, Evans Gyimah said the agreement between the management and his members was reached over the weekend.

“We are working now but there are some grievances that have been agreed on between both parties. So that is why today you see that the workers have started working. It is not all that easy but because of the agreement that both parties have agreed on, that is why we (the workers) are working.”

“I don’t think that is all, but we are satisfied with what has been agreed upon so far.”

Earlier, the resident engineer for the interchange in Accra, Kwabena Bempong expressed worry that the timelines for the project may be further affected if workers do not call off their strike.

The project has already been delayed because of the coronavirus pandemic.

In an interview with Citi News, Mr. Bempong said “every day that they don't go to work is a day lost. We have a very tight schedule.”

The project is being undertaken by Zhongmei Engineering Group Limited, with Messrs Associated Consultants Limited (ACON) and the Bigen Group.