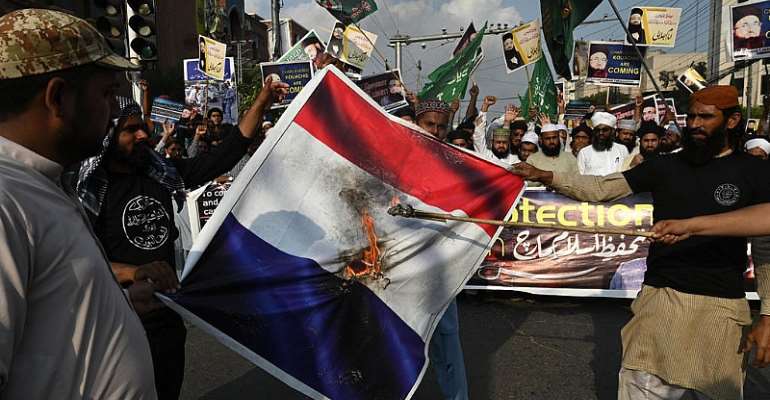 Pakistan summoned France's ambassador to the country Monday – a day after Prime Minister Imran Khan accused President Emmanuel Macron of “attacking Islam” following the beheading of a French teacher at the hands of a religious extremist.

Pakistan's foreign office told Reuters it had shared a statement with the French ambassador condemning what it called a “systematic Islamophobic campaign under the garb of freedom of expression”.

On Sunday Khan joined Turkish President Recep Tayyip Erdogan and others in criticising Macron over comments made during a high-level tribute to Samuel Paty, who was killed for showing controversial cartoons of the Prophet Mohammad to his class during a lesson on freedom of expression.

During the ceremony to honour Paty, Macron said France would not “renounce cartoons”, adding that the well-liked teacher "was killed because Islamists want our future". Macron then pledged to fight "Islamist separatism”, which he warned was threatening to take hold of some Muslim communities in France.

Anti-French sentiment
His comments have unleashed widespread anger against France throughout the Muslim world, with Erdogan saying Macron needed a mental health check and Khan accusing him of creating further polarisation that would in turn lead to further radicalisation.

"This is a time when President Macron could have put a healing touch and denied space to extremists,” Khan wrote on Twitter. "Sadly he has chosen to deliberately provoke Muslims, including his own citizens, and encouraged the display of blasphemous cartoons targeting Islam and the Holy Prophet.”

While Macron did not directly respond to Khan, he later tweeted that the French government respects all differences in "a spirit of peace”. He wrote: “We do not accept hate speech and we defend reasonable debate. We will always be on the side of human dignity and universal values.”

Macron's vow to defend freedom of expression at all costs has seen protests erupt in several Muslim countries, where French flags have been set alight and French products boycotted.

Morocco said it vigorously condemned the “continued publication of cartoons outrageous to Islam and to the Prophet", while Jordan's Minister of Islamic Affairs said offending the prophet was "not a matter of personal freedom, but a crime that encourages violence”.

In a statement, the powerful Shiite movement Hezbollah condemned what it called the “deliberate insult" to the Prophet, while rejecting “the persistent French position of encouraging this dangerous affront".

Despite the mounting anger, Macron has remained firm. On Sunday he tweeted: "We cherish freedom, we guarantee equality, we live fraternity with intensity. Nothing will make us back down, ever.”