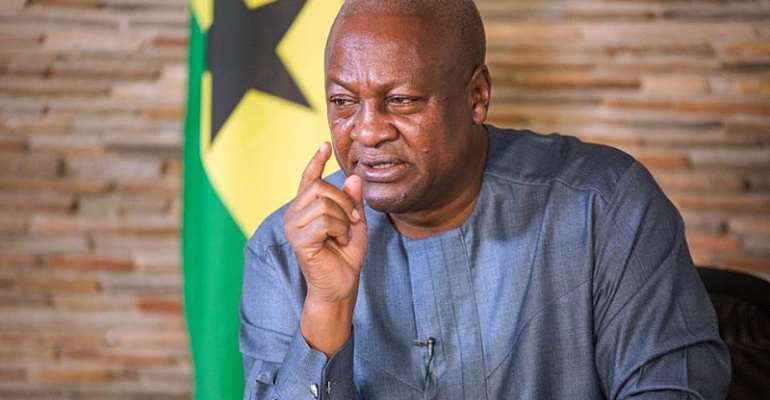 According to him, the presidency has hijacked small scale mining and has made it a preserve of its party members.

Speaking to Accra-based TV3, Mr Mahama said the NDC will be fair in the operations of small scale mining if they win the December polls.

I will grant amnesty to galamseyers

Mr. Mahama has promised to release all Galamsey operators and labourers who have been sentenced by the Akufo-Addo government if he wins the December polls.

The former President says these illegal miners, popularly referred to as ‘galamseyers’ would be granted amnesty so they can return to their families and take up decent work.

Speaking at Adum Banso of the Mpohor Constituency in the Western Region, to kickstart day four (4) of his campaign tour to the Region, Mr Mahama stated that it is ridiculous to have a foreigner engaged in the same illegal activity, released without any prosecution or fine but sentence “our very own people to these consequences.”

He said he will get them back to the fields to work in a more controlled environment as captured in the NDC’s manifesto.

“It’s sad. The government said it was fighting galamsey and they arrested, prosecuted, and jailed Ghanaians who were engaged in that activity but left the Chinese woman.”

“Today, they are still in prison. That Chinese galamsey-queen was arrested but left to go free. She was never prosecuted but our people are in jail suffering. “When we come, we shall grant all those arrested and jailed some amnesty. They will come back to their homes and work. I believe that they have suffered enough, shown remorse for whatever wrong they committed. We have instituted measures to check on the operations of small scale mining and this shall address all those issues that riddled the sector in years past,” Mr Mahama clarified.

Hottest Photo Reports
Catch up with all the political quotes from our politicians.
Advertise here
More Headlines
ModernGhana Links
Kufuor didn’t sideline Aliu Mahama on ethnic grounds – Kwadwo Mpiani
You must be encouraged and supported for not being a spectator — Bagbin commends #FixTheCountry Movement
2021 PHC: Greater Accra beats Ashanti Region to become the most populous region in Ghana
Your insatiable taste to travel in another luxurious jet to US is utter disrespect to Ghanaians – Group blasts Akufo-Addo
Family and friends gov’t accusation against Akufo-Addo may be true – Kwadwo Mpiani
Come for land, we want Akpeteshie factory as 1D1F – Asebu Putubiw Chief to Akufo-Addo
Full statement: Provisional results of 2021 Population and Housing Census
Greater Accra now the most populous region in Ghana with 5,446,237 people – GSS
2021 PHC: GSS confirm Ghana’s population has increased to 30.8 million
TOP STORIES