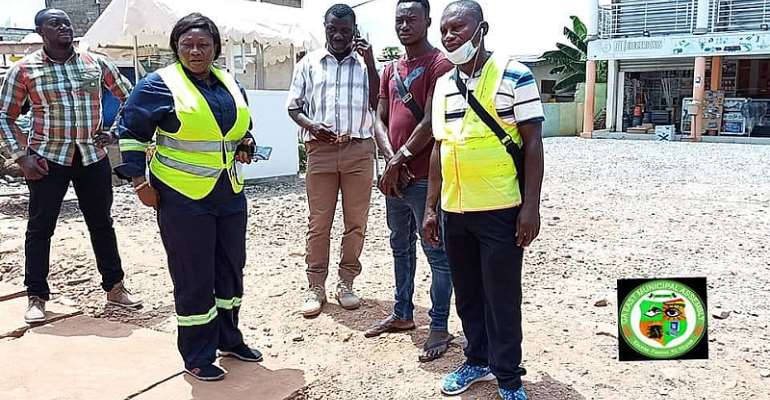 The Municipal Chief Executive (MCE) for the Ga East Municipal Assembly (GEMA) Abokobi, Hon Janet Tulasi Mensah, has again reassured the public of the Assembly and Government's commitment in fixing the roads in the Municipality.

She spoke to GEMANEWS on her inspection of the ongoing reshaping of the Abokobi-Pantang road.

The reconstruction of the Abokobi-Pantang road started during the previous administration in 2016 with the drains constructed but the Contractor left site after the elections.

All efforts by the Assembly to get the Contractor back to site to complete the work could not materialize, leading to the termination of the contract and reawarding of the project to another Contractor.

The Assembly, while waiting for work to resume, decided to reshape it from its Internally Generated Fund (IGF) to ameliorate the plights of residents in the area and road users.

She charged the grader operator working on the road to do a quality job and while also interacting with some residents, stated that the Assembly and Member of Parliament (MP), Hon. Sarah Adwoa Safo, are working tirelessly to address the roads situation in the Municipality.

"We acknowledge the untold hardships that the poor state of the roads leading to Abokobi have brought onto the people. Together with my Hon. MP, we have been engaging the Minister for Roads and Highways and we're happy to say and assure the people that the contractors are going to return to site very soon", Hon. Janet Tulasi Mensah noted.

The MURE also disclosed that the Contractor working on the Abokobi-Ashongman road is expected to resume work within next week.

"The Contractor has called me and indicated that he is returning to site in the coming week so we're waiting. He had some challenges with funds but that has been resolved now so let's all hope he comes back quickly to complete the work.

However, after the completion of the construction of the drain, the Contractor, Arimpa Construction Limited left the site during the onset of the Coronavirus (COVID-19) in Ghana in March, leaving the road to deteriorate.

The Hon MCE continued to inspect the ongoing construction of roads and drains at Musukoo and Ashongman Estate Obaahemaa.