Professor Yankah Hints Of A Senior High School For Agona Duakwa, Advocate For A Second Term For Nana Addo 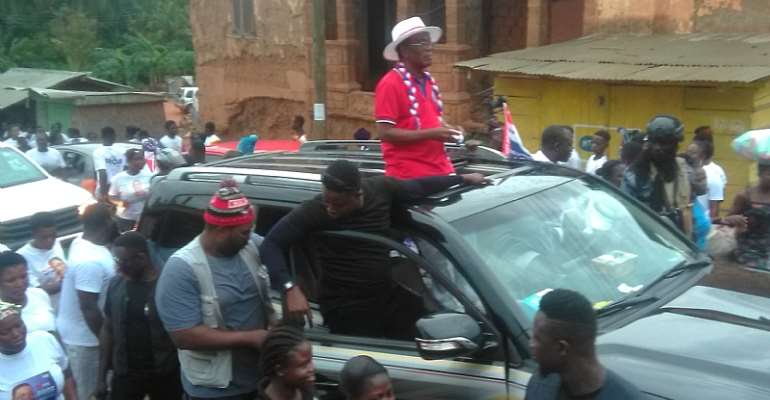 The NPP Parliamentary Candidate for the Ruling New Patriotic Party (NPP) in the Agona East Constituency, Professor Kwesi Yankah has encouraged the people of Agona Duakwa to give His Excellency Nana Addo Dankwa Akufo Addo another Four more Years to Do More for the people as he hints of a Senior High School

"The Physical Evidence is there for all to see. This is not in a Green Book. Everybody has seen the numerous infrastructure development scattered around in Duakwa.

New classroom blocks for Duakwa Salvation Army Basic School, Duakwa Methodist Basic School, and Duakwa Presbyterian Basic School. This is just the tip of the iceberg. There are more to come

The Chiefs and people of Agona Duakwa have been crying for one thing, which is a Senior High School.

As a native of Agona Duakwa, I have single-handedly constructed an ultra-modern Kindergarten block for Duakwa Methodist Basic School and renovated Duakwa Roman Catholic Basic School as well

It is, therefore, laughable to hear some people saying Professor Kwesi Yankah has not done anything for his own people in Agona Duakwa

Additionally, separate contract for construction of a proper drainage system for Agona Duakwa township to curtail erosion and flooding has also been awarded and work will soon begin"

"It is unfortunate that all our neighbouring Constituency seats from Akim Awisa to Accra is being occupied by the NPP except Agona East. The time for us is now.

This massive turned out is an indication that the NPP is poised to win the Agona East Parliamentary seat hands down. We can't be called Ophan Constituency forever

Let all go out there to thank His Excellency Nana Addo Dankwa Akufo Addo for Free SHS, Free Water and Electricity, Planting For Food and Jobs, Free Cocoa and Vegetable fertilizers, and above all appointment of the Son of the land into his Government

As you go for the house to house campaign, remind the voters of the need to vote for Nana Addo and Professor Kwesi Yankah who are both occupying the Number One (1) slot on the ballot paper come December 7 General Elections to continually benefit from the National Cake"

The Agona East Constituency Organizer of the NPP, Mr. Solomon Paintsil in an interview with newsmen noted that their House to House, Door to Door campaign had yielded results adding it would be manifested into massive votes for President Akufo Addo and Professor Kwesi Yankah respectively come December 7 General Elections

Ghanaians suffering due to mismanagement by Akufo-Addo, Bawu...
20 minutes ago