NDC Will Make Ghana Work For Everybody, Not Just A Few — Mahama 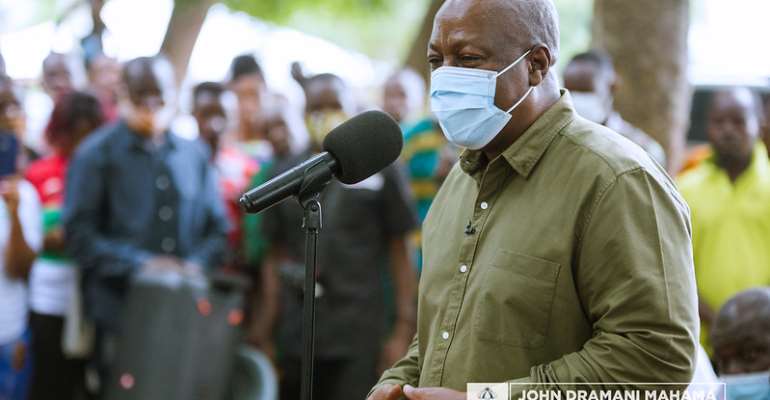 Former President John Dramani Mahama has said the next NDC government will give Ghanaians renewed hope that guarantees equal job opportunities for all.

He assured that NDC will make Ghana work for everybody and not just the family and friends of members of the ruling government as is being done under the Akufo-Addo-led New Patriotic Party (NPP) administration.

In an interview recently, Mr Mahama re-echoed the point he made during the launch of the NDC’s People’s Manifesto in Accra, saying, “We need to give Ghanaians good reasons to have hope again; we need to make them feel they are listened to and taken care of, and we need to make Ghana work for everybody and not just a few. This is why we call our manifesto, the People’s Manifesto. We pledge to create one million new decent jobs over the next four years. We will do it and I guarantee you that,” he reiterated.

Mr Mahama’s assurances came at the back of many Ghanaians lamenting the worrying nepotism proliferating in the NPP administration under President Akufo-Addo. There are concerns that a few people, described as the “Akyem Mafia”, have captured the state and arrogated all powers and resources to themselves and their cronies leaving the majority of Ghanaians to their own fate.

According to Ex-President John Mahama, he and the NDC have seen the helplessness of Ghanaians and are prepared to come to their aid. “We began by listening to you directly before putting together the NDC’s People’s Manifesto, and I, as flag-bearer, make the solemn promise that Ghanaians can hope again when the NDC returns to power next year”.

He added that, by pledging to create one million decent new jobs, the NDC has set out to reduce the high unemployment in the country, which is a direct result of the bad policies of the current NPP government. “Our intention is to boost local economies, which will, in turn, create indirect jobs for the people,” he said.

Many Ghanaians have either been crudely dismissed from the public service as happened in the dismissal of some 205 officers of the National Service Secretariat, the national security service or harassed to resign from office as happened to Dr Johnson Asiama, formerly of the Bank of Ghana and others.

Additionally, the recent targeted collapse of some 431 banking and financial institutions have rendered many Ghanaians jobless. Their dependants are leaving in penury having lost every hope in the Akufo-Addo government to turn their economic situations around. Many businesses which depended on the micro-finance sector have all collapsed.

Many employees in the construction sector, who spoke to this reporter, said they were suffocating under the current NPP rule as the government had abandoned many projects initiated by the previous Mahama administration while failing to pay over GHC2 billion owed road contractors especially those who worked on the cocoa roads.

“The situation has led to so much devastation to personal economies that the average Ghanaian has given up in despair,” one construction worker said.