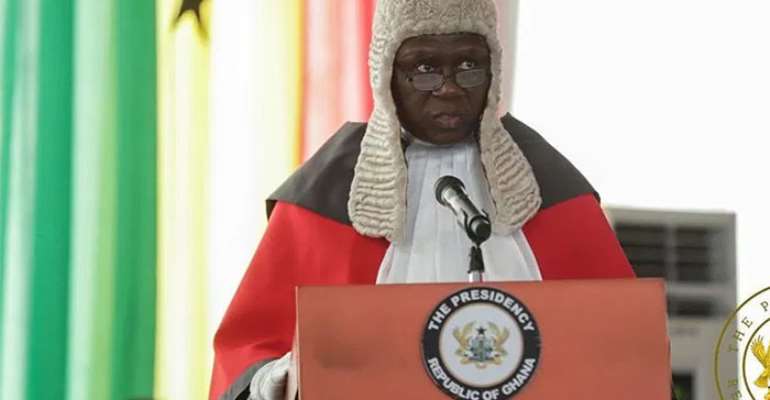 The onerous role of the media was, last Saturday, given a befitting context and boost by the Chief Justice of the Republic, His Lordship Justice Kwasi Anin Yeboah.

In his speech read on his behalf by Justice Tanko Amadu, a Supreme Court Judge, during the Ghana Journalists Association's (GJA) 25th Awards Night, he could not have demanded more from journalists in the countdown to the December 7 polls.

Their position as agenda setters and providers of news for the consumption of the citizenry is onerous.

The integrity of how this role is played will go a long way in determining what changes will occur in society.

Shortcomings in what members or actors of the fourth estate of the realm present to their viewers, readers and listeners could be costly for our democracy and governance.

The Chief Justice's demand of journalists to be responsible in the management of their tasks coming at a time when elections are around the corner is auspicious.

The political schism existing among managers of news in the many media establishments as observed by the Chief Justice could impact the quality of what is served readers, viewers and listeners especially if the political differences were allowed to overshadow ethics, principles or the national interest.

With no mass rallies – the picture of previous times when the election date draws near, Ghanaians have had to rely on new normal means of receiving messages from the political players.

The speed with which messages are churned out sometimes by non-professional players who are carried away by the feeling of being the first to break a story via social media sometimes not properly authenticated have not been helpful to the national cause.

Freedom of expression, as we all know, comes with responsibilities, duties which have been shirked by overzealous actors leading to avoidable worries to the nation. The unnecessary tension which features in the pre-election ambience of the country is the outcome of some of these actions.

This can also spell disruption in the socioeconomic lives of a country.

We can do better with how we manage news, especially when we adhere to the standards of the inky profession we find ourselves in. Unfortunately, persons with parochial interests and could therefore not care the hoot about what befalls the nation are abusing the freedom of expression.

As the Chief Justice charged us, we must hold those entrusted with the responsibility of managing the country on our behalf to account.

It is a tedious and risky assignment because in our quest to do so we sometimes collide with those who are protective of their turfs.

Thankfully we have a government which has gone the extra mile to ensure that the Right to Information is given oxygen.

A commission headed by a former high court judge is now in place, and by this development we should be able to access information from officialdom better than we did previously. That is not to state that there would not be some restrictions to certain categories of information when these especially border on national security.

Responsibility, patriotism and commitment to the ethics of the profession and values of our settings will make us more impactful to society.