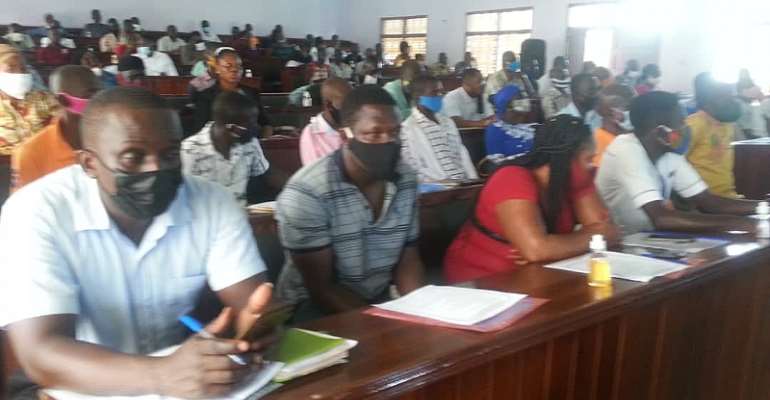 The Birim Central Municipal Assembly has organized one-day training programme on the decentralization concepts for its Unit Committees and Zonal Council Members.

Mrs. Adu further told the Unit Committee and zonal council Members to use their lobbying skills to influence philanthropist for the establishment of developmental projects at various electoral areas to augment the existing government’s projects.

She indicated that the Assembly has encountered revenue shortfall for the past few months due to the delay on the part of the Assembly to inaugurate its unit and zonal council members and urged members to come together as one people to mobilize revenue for the Assembly.

Mrs. Adu emphasized that the unit and Zonal Council members are the eyes of the communities and however informed them to cultivate good habit so as to emulate by the younger generation.

Mr. Akoto Attafuah and Mr. Keneth Agbemehia who were the facilitators of the training programme also took participants through the various topics such as the composition of the Assembly, sub-committees of the Assembly, Assembly’s sources of income, a legal framework which seeks to establish the Zonal Council, Functions of both the Unit Committee and Zonal Council and among others.

In an exclusive interview with ISD, Mr. Sampson Samuel Darkwa, the Human Resource Manager of the Assembly said the training was meant to equip members on decentralization concepts to enable them to execute their mandates effectively.

He indicated that in all 100 persons have benefited from the training programme.