GAWU & Our 60years Of Promoting Decent Work In Agriculture 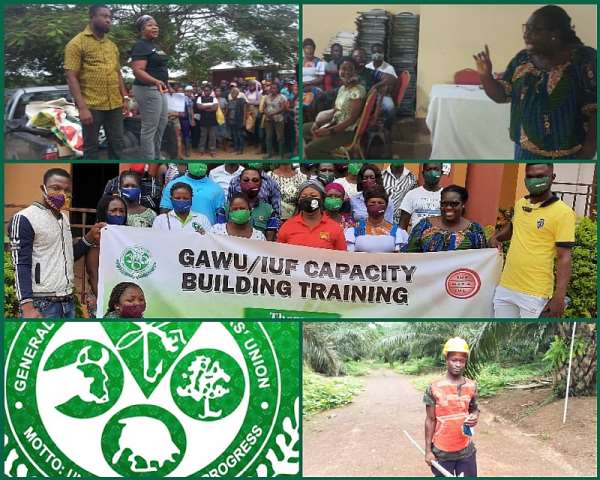 Ghana’s General Agricultural Workers’ Union (GAWU) is the nation’s biggest trade union organizing farmers and agricultural workers both in the formal and informal sectors of our country. GAWU has been working together with smallholder farmers and other non-wage rural workers since formation on the 9th of February, 1959.

We are currently working in over 200 communities across all the regions of Ghana. The Union is non-partisan and hence not affiliated to any political party in Ghana. The ultimate goal of GAWU is to organize Ghana’s agricultural workers in the formal and informal sectors and to champion the cause of agricultural workers through consistent empowerment, policy advocacy, and proper representation at the highest levels.

GAWU is one of the affiliates of The International Union of Food, Agricultural, Hotel, Restaurant, Catering, Tobacco and Allied Workers’ Associations (IUF), an international federation of trade unions. The IUF is composed of 425 affiliated trade unions in 127 countries representing over 10 million workers. GAWU joined the IUF in 1994.

As GAWU, we pride ourselves in the over 60 years of advocating, promoting and negotiating for Decent Work in the Agricultural Sector of Ghana.

What is Decent Work?

Before there was a United Nations Conference on Sustainable Development in 2012, there was a GAWU that was fighting alongside, advocating for, and negotiating together with Ghana’s farmers for a better economic standing from their daily work.

That is where our pride comes from. It’s from the FACT that the many decades-long activities of Ghana’s General Agricultural Workers’ Union (GAWU) ties in very strongly with Goal 8 of the UN Sustainable Development Goals: Decent Work and Economic Growth.

The 4 Pillars of Decent Work illustrate its true meaning.

Going by the above definition, the United Nations educate us that no country is immune to a lack of Decent Work. Everyone is entitled to Decent Work. The jobs and economy of the future will be urban. It is estimated that about 60% of the world’s population will live in cities by 2030. This highlights why proper care and advocacy for our agricultural farmers, who are predominantly rural folk, should be prioritised.

Agriculture in Ghana is known to be the main source of work for those in our rural communities. A significant portion of Agricultural activities also involves the formal sector. Access to Decent Work for those in Agriculture is directly correlated to national development because Agriculture remains the backbone of Ghana. By extension, the work of GAWU affects each and every Ghanaian.

Our work towards the Decent Work agenda is cut out for us. About 45%-90% of the world population already operate within the informal economy. Worldwide, there are over 150million children in Child Labour. Women earn anywhere between 4%-36% less than men. All these are to be tackled if Decent Work is to be attainable for all. Many local governments all over the world have already taken measures to ensure that the solutions to these challenges are being worked at.

GAWU and the Decent Work Agenda.

GAWU has extensive experience in seeking to enhance the right to organisation and collective bargaining in Ghana. GAWU addresses the rights deficits in the world of work in the rural areas by seeking to extend and grow social protection to the benefit of rural informal economy workers, especially women. We also enhance the participation of the rural working people in decisions that implicate their quest for decent work and life.

One of GAWU’s aims is to tackle the manifold manifestations of Decent Work deficits in the rural areas of Ghana. We do this through the further consolidation of the organisation of small-scale producers and champion their focused pursuit of furthering their Decent Work agenda. We build on our organisations by focusing on communities in all the Districts we operate in, so as to work towards developing social dialogue between the organised district level structures and the decentralised governmental structures, even including the district Directorates of the Ministry for Food and Agriculture.

GAWU uses its recognition at the national level to leverage the processes of establishing district level social dialogue mechanisms. GAWU’s representation at various national structures and its leading role in the Food Security Policy Advocacy Network (FOODSPAN) greatly contributes to their establishment in an inclusive manner.

In relation to the Decent Work agenda, GAWU has already been promoting productivity, employment creation and income-generating activities among the rural producers through its collaborations with organisations like the FNV. We feel that the time has come to scale-up, expand geographical coverage and consciously pursue the mutually reinforcing strategic objectives of the Decent Work Agenda, in a manner that throws up more lessons for the extension of trade union organization to the rural and informal economy.

In a move to adapt to the dynamic nature of modern economic trends and challenges, GAWU also appointed the first-ever Business Advisor to the Union. This move was to improve the understanding of and reduce the vulnerability of farmers in their entrepreneurial endeavours. There have been a number of Forums held by the Business Advisor in conjunction with GAWU that help educate the farmers on Fair Market Practices, alongside relevant discussions on market policies, modern innovation, and learning from one another.

Leadership in GAWU has over the decades been vital to the creation of our successful strategies and internal cultures. It, therefore, goes without saying that a strong leader has been instrumental in GAWU’s recent strides towards materially contributing to Goal 8 of the UN Sustainable Development Goals.

Mr Kareweh draws on his experience as a seasoned organiser, negotiator and a farmer himself. Mr Kareweh has been involved in various policy discussions on the implications of the Economic Partnership Agreement (EPA), World Trade Organisation (WTO), World Bank, the International Monetary Fund (IMF) for Africa’s development, particularly Ghana. He has been part of Ghana’s Trade Experts’ team that worked at the ECOWAS level on the EPA between the European Union (EU) and African, Caribbean and Pacific (ACP) countries.

In his quest to further improve his capacity to champion the cause of workers, the vulnerable and the excluded in society at large, Mr Kareweh is currently pursuing the Professional Law Course at the Ghana School of Law after obtaining an LLB Degree from the Mountcrest University College. He is also a lecturer in Labour Studies with the School for Development Studies at the University of Cape Coast.

It is important to list out his merits, for this same Mr Edward Kareweh, the current GAWU General Secretary, was elected in 2016 as the Titular for the Agricultural Workers Trade Group (AWTG) of The International Union of Food, Agricultural, Hotel, Restaurant, Catering, Tobacco and Allied Workers’ Associations (IUF) in West Africa. He coordinates the work of the Group.

In recognition of the over six decades of immense contribution to the quality of life of Ghana’s agricultural workers, the Theme for 3rd National Farmers Delegates' Conference and the 11th Quadrennial Delegate Conference is: "60 years of Promoting Decent work In Agriculture, the Role of Farmers".

GAWU is one of few Unions with membership across the country that organises both formal and informal workers. International Labour Rights Forum recently conferred on GAWU the 2020 Labour Rights Defender's Award in respect of work done by the union on Child Labour in Cocoa. This is evidence of how vital the work of GAWU has been in the lives of the agricultural workers in Ghana.

Special Guest will be the Minister for Employment and Labour Relations, Hon. Ignatius Baffour Awuah. The Venue will be Noda Hotel in Kumasi, on 28th-30th October 2020. COVID Protocols will be observed. I’ll keep you updated!

Maxwell Ampong is an Agro-Commodities Trader and the CEO of Maxwell Investments Group, a Business Solutions Provider. He is also the Official Business Advisor to Ghana’s General Agricultural Workers Union (GAWU) of the Trade Union Congress (TUC). He writes about trending and relevant economic topics, and general perspective pieces.

Latest Photo Reports
Catch up with all the political quotes from our politicians.
Advertise here
More Macroeconomic Bulletin
ModernGhana Links
The state of the Oil Palm Industry worldwide
Importation of frozen chicken in Ghana
The gap between the lending rate of the commercial banks and the monetary policy of Bank of Ghana
Crypto-driven Universal Basic Income as a tool to reach refugees during the pandemic
Everyone has that one idea they’d like to execute successfully.
Shortage of Shipping Containers Worldwide
The greatest health risk to the Ghanaian working class
The Business of Fashion, the Internet & Corporate Style – with UK’s Susie Bubble
Venture Capitalism – how and why to get in early.
TOP STORIES