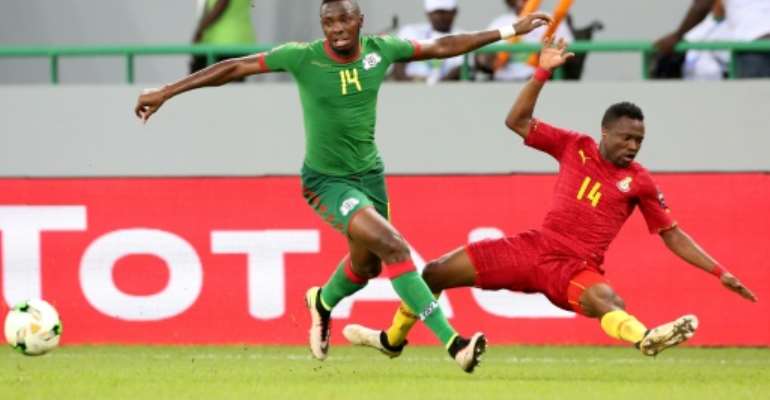 Defender Issoufou Dayo scored a rare goal to give Renaissance Berkane of Morocco a 1-0 win over Pyramids of Egypt in Sunday's CAF Confederation Cup final.

Dayo only previous effort in the competition came more than a year ago at home to Ashanti Gold of Ghana in a round-of-32 second leg. The title decider was delayed five months because of the coronavirus pandemic.

Beaten in the final of the secondary African club competition last season by Zamalek of Egypt, Berkane made no mistake at the second attempt and should have won more convincingly in Rabat.

The Moroccans created far more scoring chances than the Egyptians before surviving a tense finish when reduced to 10 men on 89 minutes after Bakr el Helali was shown a red-card.

Burkina Faso international Dayo -- the only non-Moroccan in the starting line-up -- struck after 15 minutes at the Stade Moulay Abdallah in a match staged behind closed doors.

A goalmouth scramble after a free-kick ended with the centre-back credited with the goal that proved the match-winner.

Berkane are the fifth Moroccan club after FAR Rabat, FUS Rabat, Moghreb Fes and Raja Casablanca to win the African equivalent of the Europa League.

North African clubs have dominated the 17 editions of the Confederation Cup with Tunisian clubs also lifting the trophy five times, and Egyptian giants Al Ahly and Zamalek once each.

Berkane will defend the trophy next season while Pyramids go into the CAF Champions League or Confederation Cup depending on whether they finish second or third in the Egyptian Premier League.

He preferred defender Abdallah Bakry, signalling a cautious approach that backfired during the opening half with the Cairo outfit lacking numbers on the rare occasions they attacked.

Berkane pressed Pyramids and 35-year-old forward Mouhssine Iajour was a constant threat with his pace.

It took the Egyptians 25 minutes to worry Berkane when Mohamed Farouk fired narrowly wide from an Omar Gaber pass.

Cacic changed his approach as the second half progressed, bringing on attackers Ibrahim Hassan and Antwi. Farouk once again came close to equalising.

Hamid Laachir wasted a chance to put Berkane further ahead on 72 minutes by blazing over from close range after a defensive mix-up.

El Helali was sent off after a VAR (Video Assistant Referee) review for a reckless challenge on Omar Gaber, but Pyramids could not find the equaliser that would have taken the final to extra time.

It was a disappointing end to the first African campaign of Pyramids, who are called the 'Manchester City' of Africa because the club has benefited from spending sprees by Saudi and Emirati owners.

Renaissance are known as the Orange Boys as they are based in Berkane, the northeastern hub of citrus fruit production in Morocco.