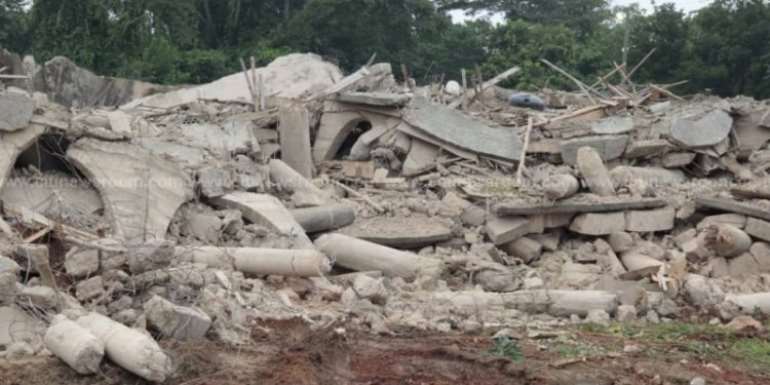 The founder of the Church of Prosperity, Prophet Akoa Isaac, was on Saturday, October 24 granted police enquiry bail.

He was arrested on Friday, October 23 in relation to the collapse of his church building at Akyem Batabi in the Eastern Region.

The Deputy PRO of the Eastern Regional Police Command, Sergeant Francis Gomado, indicated that full-blown investigations have commenced to ascertain the cause of the collapse.

“The leader of the church was arrested on Saturday. He was made to write a statement to aid in investigations. As we speak he is on a police enquiry bail. He will be reporting periodically until the final determination of the case.”

“Investigation is ongoing, all concerned parties are collaborating. Definitely, we will come to the bottom of it and whatever is arrived at will be made known to the public,” he assured.

Rescuers led by the National Disaster Management Organisation (NADMO) retrieved 22 dead bodies including that of a baby girl from the rubble after the church’s uncompleted three-story building collapsed on Tuesday.

Eight survivors were saved during the earlier stages of rescue efforts.

The three-story building which served as a structure for the Church of Prosperity collapsed around 2 pm on Tuesday, October 20, 2020.

After some four days of searching for survivors, NADMO halted the use of machines.

The Ghana Air Force provided the sniffer dogs during the early hours of Friday to check for possible bodies covered by the debris.