#ENDSARS in Nigeria and the questions of oppression and freedom 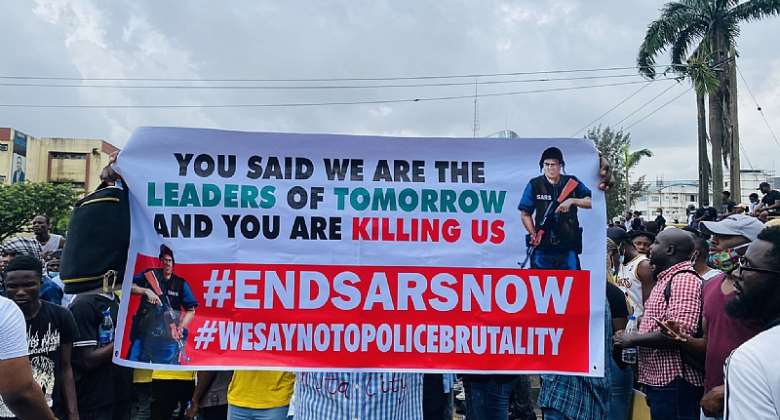 Nigeria clocked 60 years on October 1, 2020. Despite the Covid-19 pandemic that negatively affected the celebration of the country’s diamond jubilee, many Nigerians across the globe were rather disappointed than happy. On social media, the country was pitiably and angrily dragged for many reasons that include poverty, poor infrastructure, sick healthcare, poor education, insecurity, corruption, and bad governance. “It all falls and rises on leadership”, as said by John Maxwell. Since Nigeria’s return to democracy in 1999, indices of development are yet to take strong footings. The country once had the ambition of being rated among the top 20 developed nations in the world by 2020, yet Nigeria scores abysmally low in every rating of development. Disappointedly, the so-called leaders appear to be unbothered.

The cry for good governance in Nigeria has been on for many years. In the latest release of the Mo Ibrahim Index of African Governance (IIAG), Nigeria ranks 33 of 54 countries. Indices that were considered by IIAG are safety and rule of law, participation and human rights, sustainable economic opportunity, and human development. On the globe, the Worldwide Governance Indicators (WGI) rates over 200 countries for good governance paying attention to six indicators – voice and accountability, political stability and absence of violence, government effectiveness, regulatory quality, rule of law, and control of corruption. By available information, Nigeria is rated at 125, 185, 167, 160, 156, and 166 respectively, placing the country at an average ranking of 160 of 200 countries. What this means is that Nigeria – the so-called “giant of Africa” only claims to be better than 40 countries of which a good number might have been ravaged by several natural disasters and war-like incidents. Therefore, it would be fair to ask – What has Nigeria achieved in 57 years of relative peace, excluding 3 years of the war they call civil?

It is normative for every Nigerian to think that good governance only appears in the manifestos of Nigerian politicians building up to an election year. Once the politician wins an election, every promise to deliver good governance that was possible in the manifesto becomes as impossible as a camel passing through the eye of a needle. For too long a time, Nigerians developed a tolerant culture for corrupt politicians who felt as though being in politics is a favour they do to the people. Sadly, the people for lack of education and conscientization, and even more, political repression, have done nothing but bitterly and tearfully complain in secret, while they pretentiously genuflect before their starvers and oppressors in open. The questions kept coming – Which day? Which day?

If the change Nigerians so anticipate were to come through ballot boxes, the onset of 2015 would have made the difference. This is not to say that the ballot boxes can never bring about the desired change. You will agree with me that voting is only a medium to exercise the content of the mind. The events in 2020, particularly the heights of police brutality as well as the resistance and counter-resistance have caused Nigerians to realise that it goes beyond having the power to vote but voting on the premise of being well-informed about the character and capacity of who should lead. While this task would be much easier for the “politically aware” who understand that they deserve better, it might be difficult for the “political pawns” who move in the direction of their bellies, religion, tribe, or cult. The latter are those who for every reason has compromised what should still be regarded as the turning point for our country – the ENDSARS protest.

In the mention of corrupt sectors in Nigeria, it will be a disservice to the word, “corruption”, if the Nigeria Police Force is not included. The Socioeconomic Rights and Accountability Project conducted a survey that rated the Nigerian Police as among the top-5 most corrupt sectors in the country. Corruption is acceptably defined as the use of publicly entrusted powers for private gains and it is famously endemic in Nigeria. It is a normative sight in Nigeria to see Police Officers extort money from civilians, take money for bails even when they preach that bail is free, go with civilians to ATM spots to take a huge amount of money, recklessly search phones and private properties, kill, maim and cause bodily and emotional harms to innocent citizens, and even incriminate people for pecuniary benefits or satisfying the wishes of an elite. These monstrous acts are evident in studies and media reports, yet barely do the police authority bring any of the bad guys to face the law. Sometimes, the bad guys are even promoted to higher ranks or co-opted by the so-called elites into their private security architecture. The feeling that is created is that to melt mayhem on citizens is the password to dine with the crème de la crème. It is public knowledge that the evil committed by the Police Force on Nigerian streets and in communities is to return proceeds to those that sit in high places. Nigerians are forced into believing these narratives, and they try to understand how a bad Police Officer that has been reported is seen much later parading the streets, looking for more souls to devour.

For many years, the absence of consequence for the inimical actions of the Nigeria Police Force coupled with slow feet to reforming the security agency has reinforced grave distrust in the formation by citizens. Deep resentments against the government who are rather seen as an accomplice to police brutality have also emerged strongly. Sadly, Nigerians have swallowed all of these not because they would not speak up if they so wish, but have been made to believe that to protest against the government is to get arrested or to unceremoniously pay a supreme price (a tool that chiefly characterizes the present administration of President Muhammadu Buhari). In a usual cartoon-like photo going around the social media when the protests started, Nigerians wrote – “how to protest and come back alive”. As funny as that photo appears, it is indeed the actual state of things, and so sad to recount that some genuine protesters never came back alive.

Recent moments in Nigeria have been solemn. A kind of introspection that has never been, is sweeping across the country. The people have grown a dreadful and needful consciousness and are supported by strong forces across the globe. There is a sincere quest to bring Nigeria to a path of prosperity and development, where every citizen positively feels the impacts of government. The politicians are worried about their physical, social, and economic safety because their days are numbered. The so-called leaders have betrayed the social contract and must by now be stunned at the fact that an uprising is possible in Nigeria. The protests might have ceased but the resentments remain. The more it accumulates in the hearts of Nigerians the more dangerous it will be. At this time, the government must sincerely evaluate itself and provide a Nigeria where everyone benefits. At the other divide, a strong political formation is needed, capturing entertainers, civil societies, professional bodies, academics, faith-based groups, community-based groups, and artisans. This political formation must put government on its toes, take it as a sense of responsibility to galvanize radical political and rights education for the grassroots, foster a process of sanctions and rewards through renowned global bodies, sponsor trusted and well-meaning candidates into political positions, engage security agencies on their responsibilities and welfare, and galvanize well-organised protests where necessary. At this time, building on the gains of the ENDSARS protests should be at the fore of communications among the people. That is the only way the lives that were lost in the process can be celebrated and immortalized.

Importantly, the ENDSARS protests “partly” showed that Nigerians can do without the cancerous objects of religion and tribe, which are major tools the elites have always capitalized on. It is “partly” because, what the protest achieved is the management of the divisive tools, which could be because the call for a better country is a “common good”. The “common good” lesson should be taken to heart by every Nigerian and should be a drive for the next wave of actions.

I conclude this piece by returning to mind the words of Martin Luther King, Jr., on power, justice, and love. He said – “power at its best is love implementing the demands of justice, and justice at its best is power correcting everything that stands against love”. The ENDSARS protest has made known a strong fact that Nigerians have the power to be free from bad governance. Going forward, that power must be used in appropriacy to fulfill the demands of justice and love toward a Nigeria that works for everyone.

Betting is hurting our game, players and team officials are ...
12 minutes ago