We Must Eliminate Fake News From Media Space — Akufo-Addo 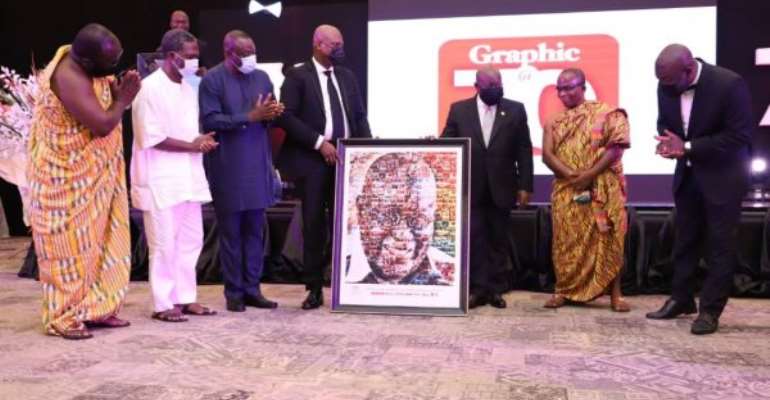 President Akufo-Addo has called for the elimination of fake news from the media space.

Fake news, he said, "is not only alarming but pose a serious threat and danger to the very fabric of society."

Speaking at the 70th Anniversary Ball of the Graphic Communications Group Limited (GCGL) in Accra on Saturday, the President pointed out that though technological advancement had brought several improvements to the speed at which news reached the world, this had also engendered 'fake news', which presented clear dangers that ought to be addressed.

"It is great that we no longer have to wait till tomorrow morning to find out what happened yesterday, thanks to technology. But again, thanks to technology, we now have the phenomenon of people manufacturing totally false or fake stories that easily pass off as news," he said.

President Akufo-Addo emphasized that the development was not only alarming, but "it also poses a serious threat and danger to the very fabric of our society."

"We must all make a concerted effort to eliminate this phenomenon from our media space. Difficult though, that might be, the health of the nation requires that we must succeed," he stated.

The Ball is part of year-long activities marking the 70th anniversary of the Graphic Communications Group.

The celebration is being held on the theme: "Seven Decades of Influencing National Development and Building Brands."

The President noted that for many Ghanaians, Graphic was the newspaper or official gazette just as is used to refer to any hot beverage.

"Graphic has been dominant part of our lives as the dominant and authoritative source of news of the nation...In this era of social media and multiple sources of news, it is tempting to under value the powerful role that Graphic played in the critical early years on the country," he said

President Akufo-Addo stated that Graphic made a name for itself as a newspaper that was afraid to speak the truth and held those in authority to account.

"Graphic's record of independent expression tells us that state media need not be a propaganda tool of the ruling government," he said.

The President said owing to the credibility of the Graphic brand, it wasn't a wonder that regular attempts are made to post false stories on websites that are set up deliberately to look like the official Graphic website.

"I hope that Graphic will resist the temptation to join in the rush to be first in the news and end up giving credence to false and malicious stories.

"If you go down that road, future generations will not ask, is it in the Graphic, a sign of authencity or say I read it in the Graphic as the final words of all conversations and an end to all arguments,” he said.

The commended The Daily Graphic for the efforts and advocacy role in helping bringing the people of Ghana up to speed on the measures being adopted by his administration to stem the Coronavirus pandemic.

"Your efforts have been a welcoming compliment to those of government as you and the electronic media have provided me the channel through which my Sunday broadcasts on steps being taken to defeat the pandemic have reached Ghanaians," the President noted.

Your insatiable taste to travel in another luxurious jet to ...
52 minutes ago

Ghana’s 3.9% economic recovery is sluggish; Ghanaians must w...
54 minutes ago