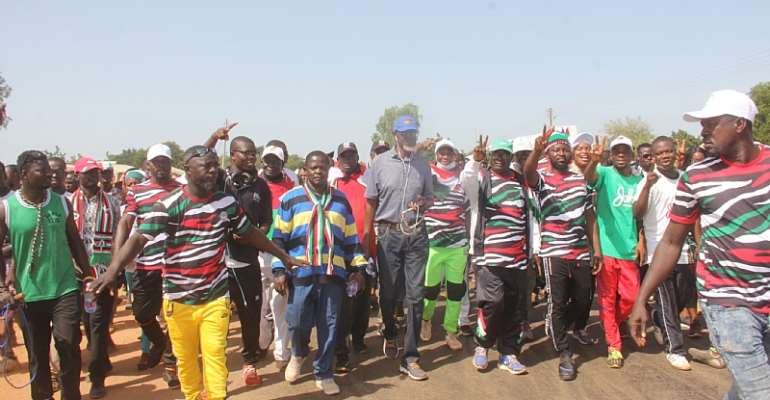 Former Member of Parliament for Zebilla Constituency in the Upper East Region, Hon. Lawyer John Akparibo Ndebugre has said he is not a supporter of the ruling New Patriotic Party and opposition National Democratic Congress (NDC).

He noted that the current insecurity and the dictatorship style of ruling the country has made him throw his support behind the former president John Dramani Mahama.

Hon. John Akparibo Ndebugre said this at a peace and unity walk organised by the NDC in the constituency to reunite the rank and file of the party

Addressing hundreds of NDC party supporters in Zebilla on Saturday, Hon. John Akparibo Ndebugre said, "President Nana Akufo-Addo in opposition promises many many things which he has not fulfilled."

According to him, President Akufo Addo accused John Dramani Mahama of running family and friends government.

Ndebugre indicated that it was only Joyce Bawa Mutari, a cousin to the former President and some few friends that were under him. "But now, hardly will you hear names from the Jubilee House like Nuhu, Ibrahim, Abugri. Those there are all Akufo-Addo's family and friends.

He noted only a few from the North Eastern Region have been employed to work at the Presidency.

Hon. Ndebugre slams the President for allocating a V8 vehicle to be carrying his chair around and places he goes in the country.

The Parliamentary Candidate for the NDC in the Zebilla Constituency Hon. Cletus Apul Avoka, said Ghanaians have suffered too much under the four year rule of the NPP.

He stressed that it was time Ghanaians vote President Akufo-Addo and the NPP government out of power.

He admonished party supporters and sympathizers to assist the various branch executives campaign massively for the opposition NDC to win the December 7 elections.