Gunmen slaughter eight children at an Anglophone school in Cameroon 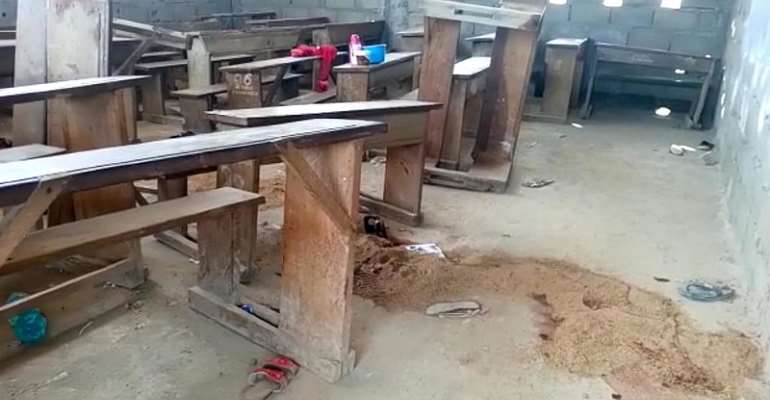 © MY MEDIA PRIME TV via REUTERS

The attackers arrived on motorbikes on Saturday afternoon and opened fire in the classroom of Mother Francisca International Bilingual Academy in Kumba in the Anglophone region, according to eyewitnesses.

The UN says that some children were killed by a machete.

“They found the children in class and they opened fire on them,” city sub-prefect Ali Anougou told Reuters newswire.

Several children were injured after jumping from second storey windows to flee the bullets.

One parent, Isobel Dione, who ran to the school after hearing about the attack, found her 12-year-old daughter bleeding from her stomach on the floor of the classroom.

“She was helpless and she was shouting: 'Mum please help me', and I told her:  'Only your God can save you now," Dione told Reuters.

The girl is in the hospital being treated for the gunshot wound.

Kumba is located in the South West region, one of the two Anglophone areas gripped by violence since 2017.

Peaceful protests by Anglophone teachers and lawyers who took to the streets to demonstrate against alleged discrimination and unfair working practices enforced by the Francophone central government were quashed, kicking off the separatist movements.

Abuses by both the separatists, who are made up of a number of groups, and government security forces have been documented by human rights groups.

It is not clear who orchestrated the attack, although Ayuk Tabe, one  separatist leader, went on Twitter to condemn the attack.

One local education official, Ahhim Abanaw Obase, said six children between the ages of 12 to 14 had died, and another eight had been taken to the hospital.

Catalogue of rights abuses by Anglophone separatists in Cameroon: report

“I am shocked and outraged by the killing of innocent school children which were attending school to get an education,” said Matthias Naab, UN humanitarian co-ordinator in Cameroon.

The UN said the attack was the worst atrocity since the school year started on 5 October, adding that more students had enrolled in the Anglophone regions than they had in recent years.