Eritrea's Isaias Afwerki: a tactical authoritarian who might be president for life

By Martin Plaut - The Conversation 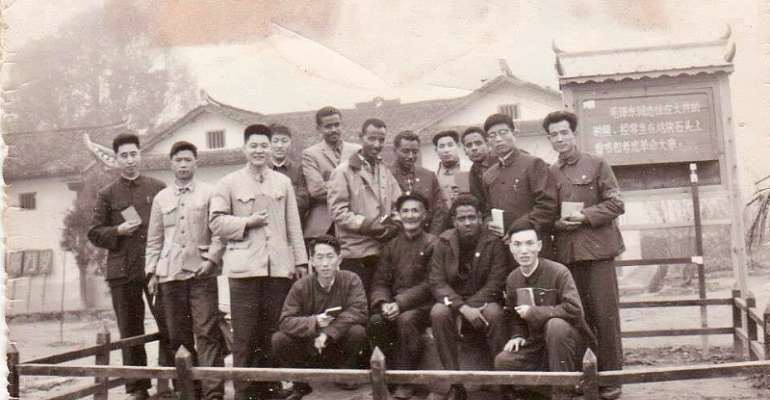 Eritrean president Isaias Afwerki in China in the 1960s. He is fifth from the left, rear row. - Source:

There are few leaders as enigmatic as Eritrea's president, Isaias Afwerki.

In my book , Understanding Eritrea: Inside Africa's Most Repressive State, I profile the president who led the country as it fought for its freedom from Ethiopia for 30 years, only to then turn on his own people.

Eritrea has been independent since 1993 but has no constitution and no parliament. No budget has ever been published. Elections have never been held and Isaias's opponents languish in jail.

The president is a brooding, taciturn figure, who has dominated Eritrean politics since the 1970s.

Isaias was born in the Aba Shi'aul district of the Eritrean capital, Asmara, in February 1942. The son of an employee of the state tobacco company, he attended the Prince Makonnen Secondary School. At the time Eritrea was an integral part of Ethiopia.

In 1965 he left to study engineering in Addis Ababa. In October the following year he abandoned his studies and joined the Eritrean Liberation Front in the Sudan, which was fighting for Eritrea's independence. No sooner was he a member of the front than he began plotting against its leaders.

He declared that the organisation was dominated by Muslims and participated in a series of splits that created the Eritrean People's Liberation Front in 1974-75.

Isaias has effectively led the party since its inception.

In May 1991 his fighters marched into Asmara, finally ending the 30-year war of independence. Isaias continues to lead both the country and his party, which changed its name to the People's Front for Democracy and Justice in February 1994.

Eritrea is a nation living without freedom. It is “ the country that's never had an election ” and is today among the most repressive states in Africa. The regime's human rights abuses are well documented .

Since Isaias rules without reference to a constitution or parliament, and without an independent judiciary, one can only conclude that these abuses are instituted at his insistence. The president surrounds himself with a small coterie of military and party officials who do his bidding.

As the US State Department's 2019 annual report stated:

Eritrea is a highly centralised, authoritarian regime under the control of President Isaias Afwerki.

Isaias expects the same unquestioning discipline and obedience from the general population that he expected of his troops during the war of independence. Control is enforced through a system of indefinite national conscription, which all healthy citizens are required to undertake. This is meant to last 18 months, but can continue for 20 years and more. The UN has declared it a form of slavery .

Quite how this came about is something of a puzzle, even for some of Isaias's once close associates. Bereket Habteselassie, drafter of Eritrea's unimplemented constitution, says this in his book, Desecrators of the Sacred Trust :

A question that everybody asks – one for which there has been no clear and unequivocal answer thus far – is: How did Isaias succeed in convincing everybody to let him do as he pleased, whatever he wanted for all those years?

Part of the answer lies in Isaias's personality: an intelligent, secretive man, he has a highly developed sense of insecurity. In a leaked assessment from Ronald McMullen, the American ambassador to Asmara in 2008, the president was described as “paranoid”. At the time, Isaias believed that both Ethiopia and the US were attempting to kill him.

As a result he was reported to switch plates with subordinates, apparently to avoid being poisoned, and to sleep in different locations to foil a coup or assassination attempt.

The ambassador's report points to another key to Isaias's policies: the fact that he was trained in China at the time of Chairman Mao's notorious cultural revolution , during which millions were killed. The American ambassador quotes the Chinese ambassador to Eritrea as saying “he learned all the wrong things”.

He used this organisation, sometimes referred to as the People's Party, to ruthlessly crush his rivals, both on the left and on the right. Eliminating challenges to his rule has been a constant ever since. Whether they were wounded liberation fighters who complained about their treatment soon after independence, or soldiers asking for pay, he has not hesitated to use force to end any signs of opposition.

This culminated in 2001 in the arrest and incarceration without trial of senior liberation front leaders and journalists, some of whom had been with the front for decades. Their “crime” was to question his handling of the disastrous border war with Ethiopia (1998–2000) and his failure to fulfil his promise to implement a democracy . Those who were rounded up have not been seen since.

Yet Isaias has not survived by brute force alone. Sections of the community still revere him as the leader who brought about independence. He is also a skilled regional tactician. Although he does not tolerate Islamist movements in his own country, Isaias did not hesitate to link up with Islamist groups in Somalia (including al-Shabaab) when it suited his aim to undermine neighbouring Ethiopia, which was deeply involved in Somali affairs. This resulted in limited UN sanctions against Eritrean leaders in 2009, which were lifted nine years later.

Because of complex feuds going back to the 1970s, Isaias is bitterly opposed to the leadership of the neighbouring Ethiopian province of Tigray. He welcomed the election of Prime Minister Abiy Ahmed in April 2018, which saw the end of Tigrayan dominance of Ethiopia.

This, in turn, allowed a settlement of the border dispute between the two countries. It also opened the way to a peace agreement between Isaias and Ahmed, signed in Saudi Arabia.

The peace agreement cemented relations between Eritrea, the Saudis and the United Arab Emirates, both of which have bases in Eritrea from where they conduct their wars in Yemen and Libya. Ordinary Eritreans have seen few benefits from the agreement. Food and even water are scarce, electricity is intermittent and the land border with Ethiopia remains closed .

Isaias Afwerki has been at the helm of Eritrean politics since the 1970s. Despite growing opposition among Eritrea's large and influential diaspora, there are few signs of an effective challenge to his rule.

Martin Plaut is affiliated with the Institute for Commonwealth Studies, University of London